The true meaning behind one of Goa’s most celebrated events

Thousands of pilgrims are queuing up at the Se Cathedral in Old Goa, standing for hours to get a close up glimpse of the relics of St Francis Xavier. The 17th Exposition of these venerated relics is underway. St Francis Xavier a 16th century Spanish missionary and co-founder of the Society of Jesus (the Jesuits), worked in Goa, South India, Malacca, Japan and other regions with such fervor that he is called ‘Apostle of the East’. Born Francisco de Jasso y Azpilcueta on 7th April 1506 in Navarre, Spain, he belonged to an aristocratic family. Inspired by his colleague Ignatius of Loyola, the main founder of the Jesuits, he joined the priesthood and was ordained in 1537. After his evangelical work in India, Malacca and Japan, he set his eyes on China. But fate had other plans for him, as he took ill on Sancian, an island off the coast of China and died there on the night of 2nd December 1552.

The exposition of his relics in Goa, an event that takes place every 10 years, is taking on added importance this year, considering that Pope Francis, one of the most beloved religious figures in recent memory, hails from the Jesuits.

It was after Francis Xavier’s death that an amazing saga began. His grave was opened on 17th February 1553 and on finding his body in incorrupt condition, it was reburied in Malacca on 22nd March. Five months later the body was exhumed again and taken by sea to the City of Goa. It was kept at the Jesuit St Paul’s College, now in ruins, and then in 1613 to the Professed House of the Jesuits. In 1624 the body was placed in the Bom Jesus Basilica, where it has since been venerated by the public. Francis Xavier was beatified by the Christian Church in 1619 and canonized as saint in 1622.

Several mutilations of the body took place mostly to grant various requests for relics. The first was when the servant sent to exhume his body at Sancian island cut off a piece of flesh from the left knee to submit to his captain who wanted to know if the body had decomposed enough to take the bones away. A major removal was that of the saint’s right arm, now resting in a reliquary in the Jesuit’s principal Church of Gesu in Rome. Most of his toes have detached, some now kept in various reliquaries. By 1636 all the inner organs of the body were removed and distributed as relics to the faithful in the East and West.

These frequent disturbances to the body combined with the Expositions beginning in 1782, have taken their toll on the Saint’s body. What we see today are the desiccated relics of the wondrous incorrupt body that was seen by devotees for the decades immediately after his death.

In 1554, after the body arrived in Goa, the Viceroy Dom Afonso de Noronha ordered an official medical examination. This was conducted by the Viceroy’s physician Dr Cosmas Saraiva and the Vicar-General Dr Ambrosio Ribeiro. The latter’s report reads: “… at 9 or 10 o’clock we opened the coffin which was in the  main chapel of St Paul’s and saw the body at leisure … I felt it with my own hands … in all these parts the flesh was entire, covered with its natural skin and humidity without any corruption.”

Dr Saraiva’s report says: “… there had been no embalming of any kind nor had any artificial agents been used. I observed a wound in the left side near the heart and asked two of the Society who were with me to put their fingers into it. When they withdrew them they were covered with blood which I smelt and found to be absolutely untainted …”

In 1664, a hundred and twelve years after Xavier’s death, a French Jesuit Pére Joseph Simon Bayard examined the body with other officials, feeling the flesh and flexing the limbs. He wrote: “… The Saint’s hair is slightly black and curling. The forehead is broad and high, with two rather large veins, soft and of a purple tint, running down the middle … The eyes are black, lively and sweet, with so penetrating a glance that he would seem to be alive and breathing. The lips are of a bright reddish colour and the beard is thick … the tongue is quite flexible, red and moist … the body has all the appearances of being that of a living man …” 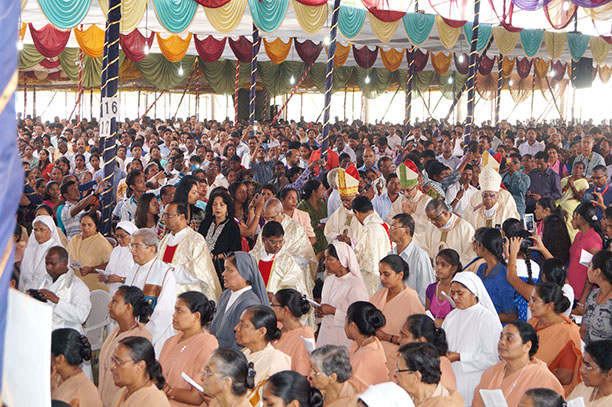 If we have presently over a million pilgrims visiting Old Goa in recent expositions, imagine what would be the scenario if the Saint’s body were to be still in the incorrupt, lifelike condition as described in the reports above!

But eventual drying up or desiccation of an incorrupt body is not unusual. The bodies of three saints canonized along with St Xavier – St Isidore of Madrid, St Philip Neri and St Teresa of Avila – were as incorrupt as St Xavier’s at the time of their canonization, but eventually desiccated. These three saints are among other saints catalogued in a 1977 book ‘The Incorruptibles: A Study of the Incorruption of the Bodies of Various Catholic Saints and Beati’ by Joan Carroll Cruz.

St Francis Xavier is celebrated in Goa as ‘Goencho Saib’, meaning Lord of Goa, even across religions. It is commonly believed that Goa has never suffered tragic calamities because of the protective presence of the Saint. Indeed it was a practice during Portuguese rule here that whenever a major crisis rose the Viceroy would place his baton in the hands of the Saint’s relics imploring his protection. This apparently worked on a couple of occasions when Maratha soldiers and other threats came ominously close to overrunning the Portuguese. But when the Indian army turned up in 1961, Goa’s beloved Saint had other plans, and soon after, Goa became a part of India.

The Exposition allows the faithful to see the relics at close quarters, but at other times the relics are visible through the glass panes of the silver casket that holds them. This casket was installed in 1637, and the splendid marble mausoleum crafted by the Florentine sculptor Giovanni Batista Foggini was installed in 1698. The casket had some of its panels removed in 1977, to allow the relics to be visible, and thus in a state of permanent exposition. 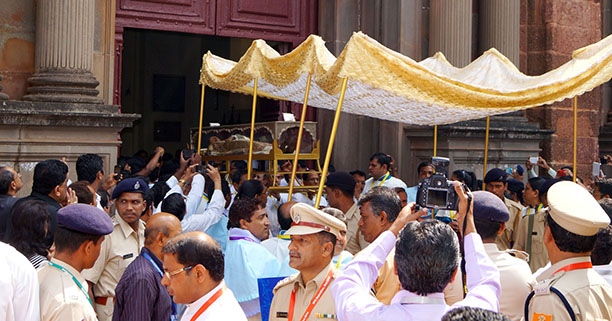 What do the relics of St Francis Xavier mean to the masses of today?  462 years after his death, the young and old of Goa, along with their religious brethren from all over India and overseas, still throng to venerate the relics with an overwhelming devotion, with many promptly putting up their photos of the relics on Facebook!

St Xavier lived for a mere 46 years, but he lives on as an immortal symbol of devotion for millions of Christians in Goa and around the world. From the towering castle of Xavier in the kingdom of Navarre to the stately Basilica of Bom Jesu, Francisco de Jasso y Azpilcueta  came a long way, but his triumphant body and devout spirit are here to stay. 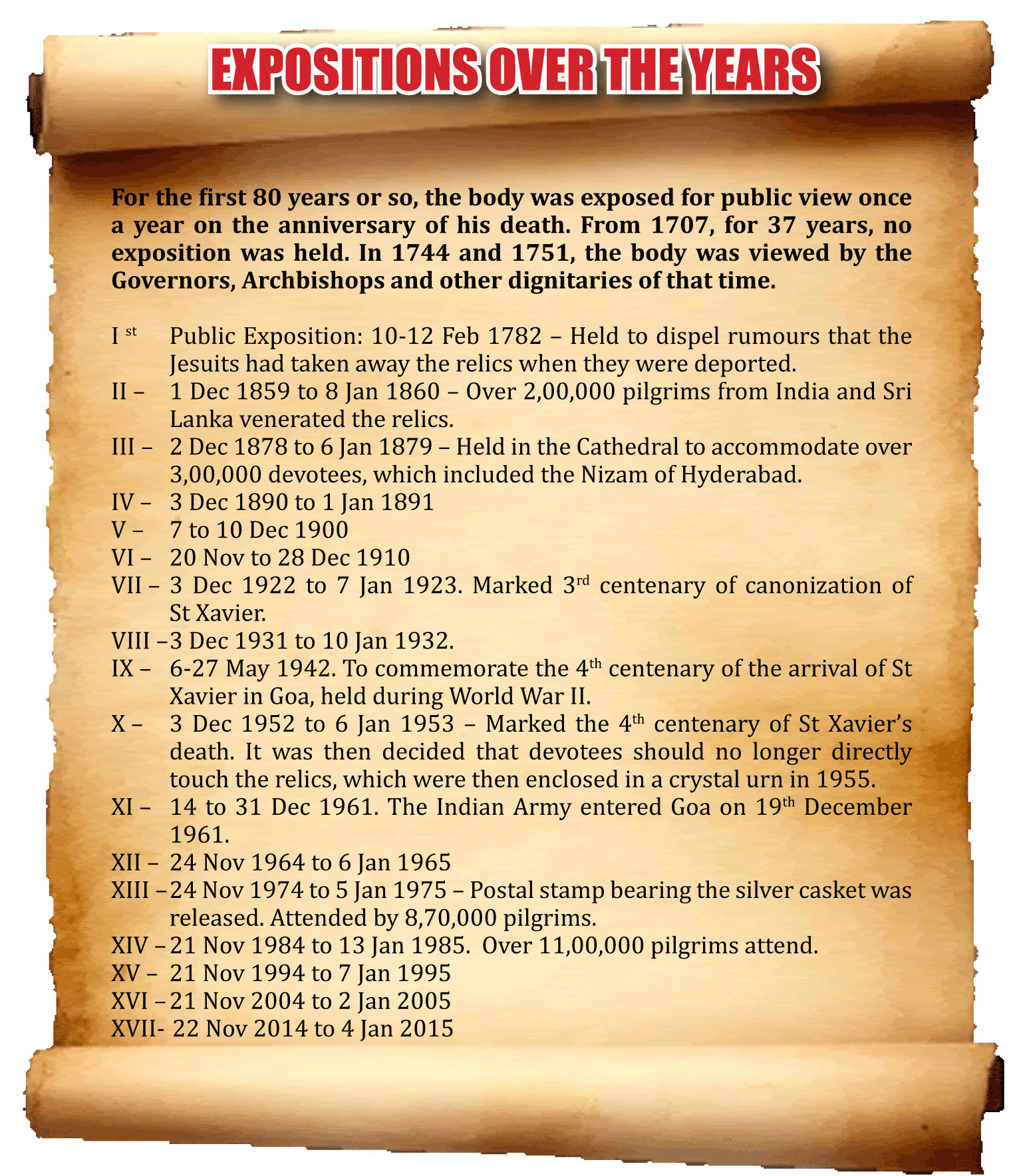 José Lourenço is a Goa-based civil engineer, author, educator and historian. He writes short fiction in Konkani and English, and is the author of The Parish Churches of Goa—a study of facade architecture. He is also the former Editor of Goa Streets.