Recent Voting Brings No Realignment, But Serves As Wake-Up Call To Powers That Be

Recent Voting Brings No Realignment, But Serves As Wake-Up Call To Powers That Be

If it weren’t for the fact that the Congress Party is all but dead in Goa, something akin to being on life support, the results of the recent municipal elections in the state could have been seen as a disappointment to the ruling BJP. After all, they wrested control of little more than half the 11 councils up for grabs, and had a poor showing in some key areas considered BJP strongholds, including Cuncolim in South Goa.

And yet, perhaps due to the fact that 2012 was not that long ago, memories of the graft-ridden government of the previous Congress government are still fresh enough to ensure that party remains deep in the background for the foreseeable future.

Still, the results of the Oct. 25 municipal balloting in Goa have made some things crystal clear. For one, the BJP would be extremely ill-advised to take Goans’ support for granted. Secondly, any possible comeback by Congress is still far off into the future because the BJP’s performance, while far from stellar, hasn’t been poor enough for average citizens to countenance another bout with Congress. At least not yet.

The election also showed that the people of Goa – despite growing clamour on social media and other forums for clean governance – are still quite willing to vote for old faces who are often very much the antithesis of change.

“People get the government they deserve. If you continue to vote for those who common knowledge says are corrupt, you probably deserve what you are getting,” said one Congress Party leader who, aware that he was criticising voter behaviour, did not want his name revealed.

The recent elections did not bring any significant political realignment in Goa, to be sure.  But that hasn’t stopped both the BJP and the Congress from claiming victory.

“The people have continued to repose faith in us. This verdict is indicative that the government is on the right track,” Chief Minister Laxmikant Parsekar said immediately after the vote. He cited the fact that the BJP would rule in six of the 11 councils, which is more than 50 percent, while one race was a tie with the BJP and the local Congress sharing five seats each in Canacona.

The Congress, on the other hand, which didn’t take part in the elections but allowed individual leaders to field candidates under their wings, said that if the BJP were as strong as claimed, it would have wrested control of even the Congress-held councils – which didn’t happen.

“If the BJP was as good as they claim to be, how is it that people have voted for the Congress not only in places where the Congress leaders are popular but also in some BJP held councils?” asked Congress spokesperson Sunil Kawthankar. 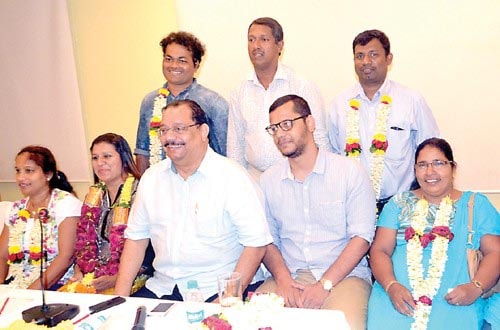 Joaquim Alemao with councillors elected to the Cuncolim municipal council

He pointed out that the BJP didn’t win in places like Cuncolim where the ruling party holds sway and was denied a majority in Canacona, another BJP stronghold. To be fair, however, it must be noted that not everyone sees Cuncolim as a true BJP bastion, considering that BJP’s seat there was obtained after a divided opposition led to a vote split.

The truth, say some observers, is that the elections were something of a confirmation of the status quo, with both the BJP and Congress remaining strong in their respective enclaves.

“This definitely cannot be generalised as an anti-incumbency trend in any manner,” said journalist and political commentator Sandesh Prabhudesai.

Where does that leave the average citizen who wants good governance?

“The Congress leaders who managed to hold on to their turf aren’t really beacons of propriety in public office. People continuing to vote for them may be good for the party but from a point of view of improving governance, nothing has changed,” said a Congress leader who declined to be named (the same one quoted earlier).

Truth be told, Congress leaders who have managed to hold on to their turf are among those who during the last reign faced the most severe allegations of corruption. Their victory has meant that people have remained loyal to them despite their shortcomings.

Take the cases of Vishwajit Rane and Chandrakant Kavlekar, Congress representatives from Valpoi and Quepem, respectively. Both have shown how resilient they are on their own turf by winning elections. And yet both ended the last term embroiled in corruption charges – Rane was accused in several health scams when he was health minister, including unnecessary expenditure, doctored recruitments and others allegations. Kavlekar as Chairman of the Goa Industrial Development Corporation was named in the industrial plot allotment scam that dominated headlines several years back. That scam resulted in the suspension of several officials, including William Borges, the organization’s former deputy general manager.

What does this mean for the 2017 State assembly elections?

One way of looking at it is to note the prevailing sentiment of “Party be damned. A local hero is a local hero.” The biggest hurdle the Congress faces is infighting within the party. Take the Cuncolim case, for example. Two Congress leaders fielded candidates against each other – John Monteiro vs Joaquim Alemao, who eventually got the upper hand. Or in the Vasco municipality – Congress MLA Mauvin Godinho made no bones of the fact that he was siding with the ruling BJP, leaving his Congress cohorts in the lurch and underscoring the long distance the party must travel before it might taste electoral success again.

“Congress continues to be the party of individuals and not an organisation. The municipal elections have proved it once again. If the Congress can’t find fresh new faces and quickly, they are doomed,” Prabhudesai said.

It’s clear the government cannot afford to sit back and expect easy sailing. At the same time, however, unless Congress gets its act together, don’t expect any major change from their current, comatose state. A big question is whether all this leaves open the door for a third alternative. Aam Aadmi, are you listening?