We may not have a Ganga, but our  Waterways hardly get a clean bill of health

The following story is the latest installation of Goa Streets #KeepGoaBeautiful initiative, promoting a cleaner and greener Goa.

In many ways, Goa is luckier than the rest of India. We don’t have a Ganga or a Yamuna, both of which feature among the world’s ten most-polluted rivers. Nor do we have a Daman Ganga whose banks host the Gujarati city of Vapi, rated as the world’s worst polluted industrial town.

While Goa hasn’t gone down that stream – yet — here’s some water for thought, while you’re plotting your next recreational dip in any of Goa’s many rivers.

Scientists of the National Institute of Oceanography, in a study conducted over the last decade, have discovered that waters in Goa’s two main rivers – Mandovi and Zuari – and along the coast have levels of bacteria far higher than that permissible for recreational bathing and even fishing.

The “European Blue Flag Beach Criteria” state that coliform counts in excess of 500 CFU/ml in natural water are unsafe for bathing. Mandovi’s is as high as 1,900 CFU/ml. (CFU/ml is a unit used to measure the bacteria present in water, indicating the total Colony Forming Units of bacteria present per ml of water.)

In 2014, the Goa State Pollution Control Board (GSPCB) conducted its own study, which only confirmed what was earlier discovered by the scientists of NIO. 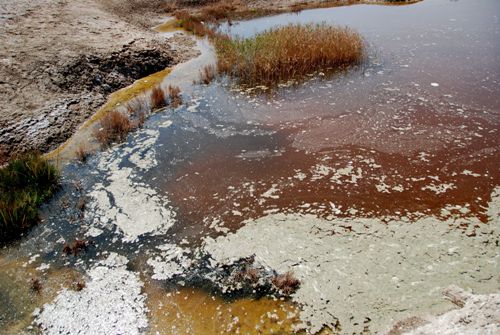 “The coliform bacteria content in the water is alarmingly high. The water is full of bacterial contamination which makes it unsafe for recreational bathing, water sports and fishing,” the GSPCB said in its report.

Authorities confirmed that there is no continuous monitoring of sea water quality in Goa. With the amount of sewage discharged into the ocean by Goa’s 1.5 million local population in addition to the 4 million people who visit annually, it’s safe to assume, however, that much of the coastal water is also contaminated. One piece of evidence supporting this assumption is the rising jelly fish population off Goa’s coast, as jelly fish often proliferate when marine ecosystems become disturbed.

The State has 28 water monitoring stations located in its rivers, plus an additional eight for lakes, three for canals and one in a creek.

Monitoring at these stations has revealed that the coliform levels shoot up during the monsoons as during this time of the year a lot of the sewage that is otherwise confined to land makes its way to the waters.

Sewage runoff is one of the biggest pollutants of Goan waters. Only two cities in the State have sewerage plants up and running – Panjim and Margao. Calangute is only just getting its plant, while Panjim is expanding its facility to include areas such as Dona Paula, Caranzalem and Taleigao.

The rest of the sewage in the State is sent to septic tanks, which in turn discharge the sewage into the ground, contaminating ground water. If the septic tank is close to a river, that’s where the sewage will find its way. It can be assumed that some 90 percent of Goa’s sewage is untreated, but it’s hard to say how much of it makes its way to rivers. Coastal sewage definitely does because the soil is sandy.

Alarmed by their own findings, the GSPCB has now decided to carry out a study to evaluate the “carrying capacity of the State’s rivers.”

“The move is to have in place baseline data to help the board decide better on granting permissions and clearances to riverine projects including marinas, flotels, casinos, jetties and other developments,” Board chairman José Manuel Noronha said, adding that the study will be commissioned to an independent agency, possibly the NIO, which is located on the Dona Paula hill.

The ‘carrying capacity study’, according to the chairman, will examine parameters such as the quality of water, contaminants in the river and other items.

“No major projects will be allowed unless the study is completed. If it is a minor project, why should we not allow?” he asked.

Goa’s river problems are not restricted to sewage discharge. Before mining was banned, ore runoff from jetties and dumps, and during transportation via barges, contributed to the high iron content of Goa’s rivers as found by another NIO study published in 2013.

Bearing the worst of the brunt is Goa’s precious shellfish population. In the summer of 2014, hundreds of clams and other shellfish ended up ‘mysteriously’ dead in Velim in the River Sal, which flows through much of Salcete. The government commissioned a probe, which nailed no one, even as it said that the shellfish perished due to “depleted oxygen levels” in the water.

The shellfish of the Sal River are not the only collateral damage. The Chapora river, which flows along Revora, Colvale, Siolim and meets the sea at Morjim, was once famous for its abundance of shellfish like khube, tisreo, kalvam and xinane (all shellfish). Today, these are a rarity.

Is there a way out of this mess? Certainly not immediately. With no plan in place to remedy the situation, Goa’s waterways appear to be staring at a bleak future. One key first step is building awareness – and that’s part of what the #KeepGoaBeautiful initiative is about.