The land of sun, sea and sand is ready for the mega event, the 3rd Lusofonia Games which are finally scheduled to commence from January 18 to 29 in Goa. The international sports event had been earlier postponed in November, 2013 due to lack of infrastructure. That’s all apparently been taken care of now, and the government, which spent 240 crores

The Lusofonia Games are among the largest and the most prestigious multinational, multi-sport games in the world, organized by ACOLOP (Associação dos Comités Olímpicos de Língua Oficial Portugues), which involves athletes coming from Lusophone (Portuguese-speaking) countries, namely those belonging to the CPLP (Community of Portuguese Language Countries), but also others where there are significant Portuguese communities or that have a common past with Portugal. The ACOLOP is a non-governmental organisation consisting of 12 members, whose main purpose is to strengthen the unity and cooperation of its members, through sport.

The Games were allocated to Goa during the Digambar Kamat-led Congress government for which the central government had even allocated crores of rupees. Unfortunately, not much was accomplished with funds for a very long time.

The BJP government came into power in May 2012 and it was the new chief minister Manohar Parrikar, who took up the challenge and completed the much needed infrastructure within 12 months, even as the rains delayed its progress. 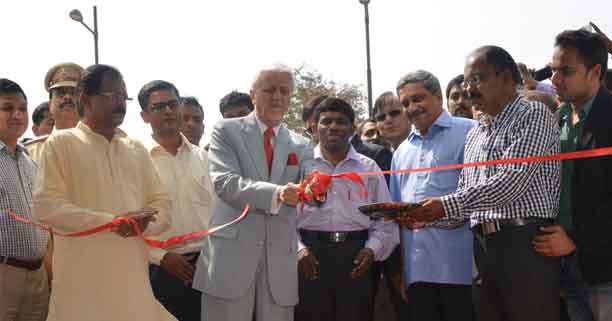 Athletics, basketball, beach volleyball, football, judo, table-tennis, taekwondo, volleyball and wushu are the nine disciplines spread at five different venues across the State. Athletics featured in the very first edition of the Lusofonia Games in 2006 at Macau. The Lusofonia Games Goa-2014 will feature a total of 17 events with 12 on track, 3 in the jump category, 1 in the throw event and a road race of 10 km. The track and field events will be held at the Athletics Stadium in Bambolim. The road race will take place at the Miramar – Dona Paula road.

Football is the official sport of Goa and the team is eyeing for a medal finish this time. The Goa Football Association has also boosted the team with the appointment of Portuguese Francisco Neto. However, Goan favorites Brazil and Portugal will not be sending their football teams, which amount to rather stunning omissions.

In view of encouraging good crowd turnover, the government of Goa has now thrown the gates to the Lusofonia Games open and made it free to the public. The high-profile games will not be ticketed and sports aficionados can watch the games free of cost. The decision to scrap the ticketing process was taken following a meeting with high-ranking Lusofonia Games Organising Committee (LUGOC) officials. All those who wish to get a piece of international sporting action, can now do so without feeling a pinch.

The spotlight of the Lusofone world will be on the newly upgraded Pandit Jawaharlal Nehru stadium at Fatorda on January 18. The electrical charge of 2,000 performers, the passionate cheers of local supporters, the bedecked stadium and its upgraded facilities will all come together to orchestrate a grand opening ceremony.

The 2,000 performers will be comprised of exhilarating folk performers and artists from Goa and other parts of India. Local school children will also be a part of the extravaganza. Giving them company and to keep the audiences enthralled, will be artists groups from the North, South, East and the West of India representing multiple ethnicity of the country.

Artists will perform dances depicting joy, cultivation, way of life, seasons, rituals and festivals in our cultural sphere. Multiple segments will be showcased in a representational way, depicting the various occupations of Goa, colours of India, magic of monsoons, Goa through Mario Miranda’s eye, and more. The entire show will be a kaleidoscope of India through a spectacle of mass cast, props and technology, edgy enough to make you want to fasten your seat belts.

To ensure smooth operations of all the performances, eminent personnel from the field of theatre and arts are closely monitoring the daily rehearsals. Rehearsals and putting together of huge prop fabrication models for the ceremonies is at full swing and international experts are working tirelessly to set up lights and projections in order to put up a breathtaking display of a wide array of programmes.