Drums can easily be said to be the oldest form of musical instruments. The day one of our cavemen ancestors stretched the hide of some wild animal across a thick ring of wood and thumped on it was the day the drum was born. Percussion instruments have since moved on into the digital age, remedy with electronic beats heralding the age of EDM, electronic dance music.

But in Poinginim, drugs a remote village in Canacona taluka of south Goa, a craftsman-musician still makes the dhol, taso and shimell — traditional drums used in the Hindu temples of Goa. Dilip Poinginkar is one of the last such drum makers in Goa.

Asmitai Pratishthan, a Margao-based trust held a Konkani festival last weekend at Ravindra Bhavan in Margao. One of the events there was a presentation by photographer and ethnographer Pantaleao Fernandes on the ‘Traditional Occupations Of Goa’. Dilip Poinginkar was a part of Pantaleao’s talk, giving a live demonstration of the making of the taso and dhol.

Walking onto the stage beating the taso drum with two short sticks, the unassuming bearded and bespectacled Dilip goes about his task with professional ease.

“The wooden base of the drum is in the shape of a bowl, with three short ‘legs’ bracing it,” he explains, as he shows the parts of the taso. “I get a raw goat hide and dry it. Then I remove the hair, using a shard of glass held at an angle, else the hide gets cut. After curing the hide, I stretch it across the wooden frame and stitch the skin, fixing it to the hoops on the rim.”

There are no screws or nails involved in the making of the taso. The securing cords run through perforations in the hide and through hoops on the outer surface of the wooden shell. When the hide goes slack, the cords are tightened to restore the taut sound.

The other drum, the larger dhol, gives a deeper sound as compared to the taso. The dhol membrane does not require stitching.

The hide is stretched across the rim of the dhol and a weight is placed on it for a day, after which it is secured at the rim of the cylindrical drum shell. According to Dilip, the hide of a male goat is used for the larger, deeper sounding dhol, while the thinner female hide is used for the smaller, higher pitched taso. The dhol has beating surfaces on both sides of its cylindrical shell, with a hole for the pressured air to escape. 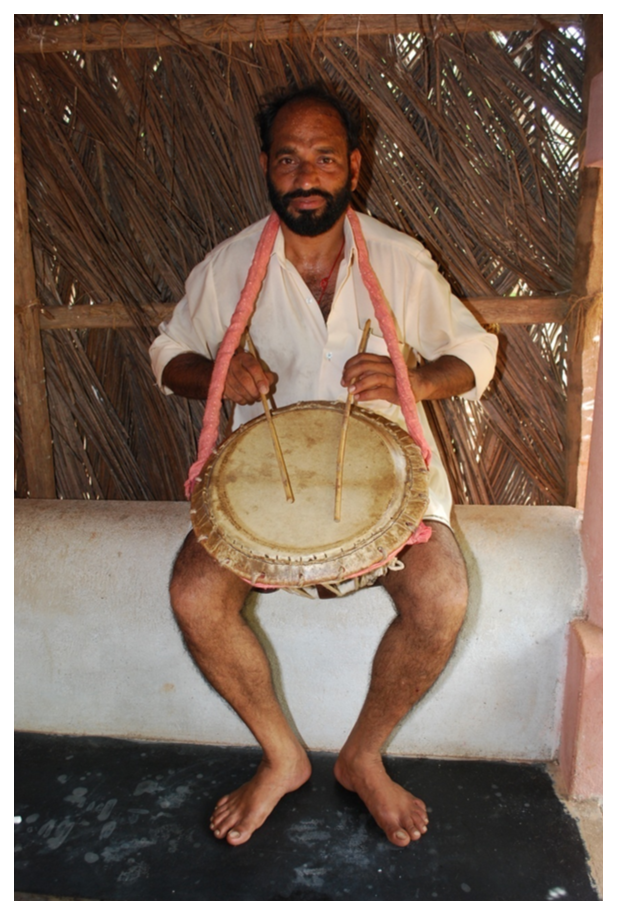 “My grandfather and father used to make these drums. Our temples need them for their regular rituals, so I too learned this craft. My son too has learned from me and if the temple needs a drum he can make it.”

“Why for temples only, what about other events like weddings?” asks Damodar Mauzo, the popular Konkani writer, who is among the audience.

“We used to go for weddings and other events, my father and other older musicians, but now my colleagues don’t want to go for these occasions anymore,” says Dilip.

The state government has not provided Dilip or his father with any support or recognition, as yet. Dilip presently works as a peon. “When I retire, I will carry on playing the drums at the temples,” smiles the affable percussionist.

“No one else makes these instruments in our village. Sometimes if people want these drums they go to Karwar or some other place to get them. The wood of the khair tree is used to make the wooden base of the taso. It gives good sound. The shell of the dhol is made from the wood of the jackfruit or other tree.”

A goat hide can cost Dilip seven to eight hundred rupees. It takes him a few days to work on assembling the drum, so he adds his crafting charges. “The wooden frame is expensive, the carpenter charges 1500 rupees to make it,” says Dilip. But he has found a way around this. “If anyone wants to make a taso or shimell or dhol, I ask them to get me the wooden base or shell, and then I assemble the rest of the instrument. In the seasonal festivities there’s a lot of demand for these drums.”

“I am prepared to teach young people to make these drums and to play them,” says Dilip, answering a query from the audience. “Of course, I would teach them in our Poinginim style. Different places have their own drum beats and rhythms.”

It is a comforting thought for the captivated audience that the engineering student-son of Dilip will continue the drum-making craft of his ancestors. They give the father and son a hearty round of applause, as Dilip bows and steps of the stage to the beat of his own drum.