When the time comes to put his best foot forward, Agostinho Fernandes stretches out his hand. Polio struck him at the age of one and robbed the strength from his feet. But that did not stop him from crawling up the rungs, tricking disability with innovation and perseverance. It was in those brief few seconds… END_OF_DOCUMENT_TOKEN_TO_BE_REPLACED

When the time comes to put his best foot forward, Agostinho Fernandes stretches out his hand.

Polio struck him at the age of one and robbed the strength from his feet. But that did not stop him from crawling up the rungs, tricking disability with innovation and perseverance.

It was in those brief few seconds when I saw Agostinho arrive in a Maruti Wagon R for our appointment at Quepem and the time he took to come up to me, that I realised how adversity can only affect you as much as you allow it to.

With both his feet out knocked out of use, his specially modified car features hand levers for acceleration and brakes. And then he opened the door and crawled towards me. His palms gripped the ground with the help of rubber slippers and his twisted body, low to the ground, moved towards me, with an incongruous shuffle of limbs.

“I have been this way since the age of one and eventually I made my hands into my feet,” says 31-year-old Agostinho, who is now a music teacher.

He has no problem earning a living, although some folks who see him crawling on the street throw him a rupee or two, mistaking him for a beggar.

“Whenever I used stop on the way to rest my hands, people would think that I am begging and they would offer money,” he says.

Often, while catching his breath in the shade of a tree along the road, he would hurriedly slink away if he saw a passerby reach into a pocket to throw him some alms.

It’s a “terrible feeling,” he says. 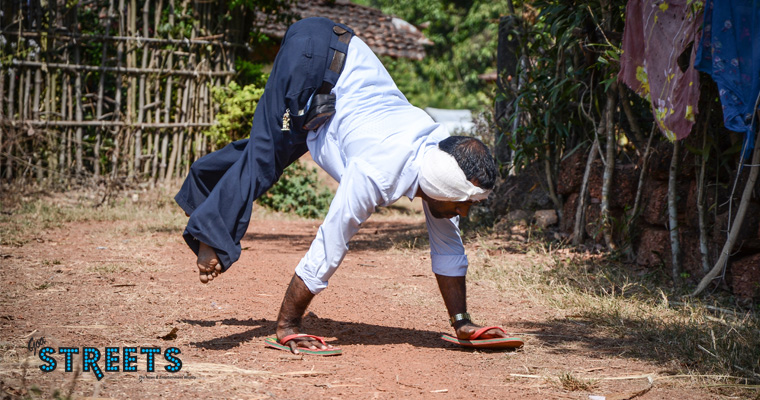 What’s not terrible is Agostinho’s story of struggle, determination and hope. He is a qualified fashion designer who chose his passion, music, as his life’s vocation.

“Music gives me happiness, helps me forget my problems and give me peace of mind,” he says.

How Agostinho learnt the keyboard is another lesson in self belief and defiance.

“My father used sing in tiatr (Konkani theatre) and that’s how I got the inspiration. But when I wished to learn music, my parents objected,” he said. Fernandes senior and his mother thought that a career in music for their disabled son would consign him to the church choir, which did not promise much.

But he ploughed on. “I did not give up. Without their knowledge I joined music classes in college with the help of a disability pension of Rs 500 that I received every month,” he said. After a stint at a well-known music school in Margao, now Agostinho teaches the keyboard to 39 students.

“I provide only home classes because it allows not only me, but the student to concentrate and learn much better in the comfort of their home,” he says, adding that he has pupils who will be answering the music grade exams organised by the hallowed Trinity College of Music in London.

Having lost his father recently, Agostinho now supports his family as the eldest son.

“I can do everything. Cooking, cleaning, driving, change the roof tiles … except climbing the coconut tree. But one day I will learn that too,” he says with a smile.

Before that, he said, he’s looking to get married.

And why does he crawl instead of using a wheel chair? This way he doesn’t have to wait for the government or anyone else to put in disabled-friendly ramps and curbs (something he knows may never happen) and still go wherever he likes.

“I prefer moving this way because, a wheelchair is a hindrance to mobility. By crawling I can get to where I want quicker. I don’t have the hassle of leaving a wheelchair and then coming back for it,” he said.

That his arms get a healthy workout is a bonus.