Colleges Strum the right chord For them it’s a pipe of dreams. The ‘rockers’ stuffed weed into the pipe’s dark cavity and lit it up. This is just the beginning. The college band is readying for their performance at Tatva 2012, decease an inter-collegiate festival organized by the Panjim-based Salgaocar College of Law. And the… END_OF_DOCUMENT_TOKEN_TO_BE_REPLACED

For them it’s a pipe of dreams. The ‘rockers’ stuffed weed into the pipe’s dark cavity and lit it up. This is just the beginning. The college band is readying for their performance at Tatva 2012, decease an inter-collegiate festival organized by the Panjim-based Salgaocar College of Law. And the artistes’ green room is already gray with a sweetish film of marijuana haze. The leading vocalist is in a dizzying state of weed-induced euphoria. But the drummer, he’s alert. He shepherds everyone on stage for the performance before the organizers disqualify them for the set because of the delay. Yet by the time festival is over, the same band is crowned a winner.

Let’s not get into names here. But this is more or less the story of how Goa’s college bands ‘rock and roll.’

In a state which loves its music, college students worship it. And that makes the people who belt out the music demigods on campus.

But getting into college bands is not easy. Merely shredding the guitar (playing a guitar by excessively caressing the fret) or pulling off some crazy notes on the vocals won’t get you far. It’s not about tricks, but being really good. And there may not be many colleges in Goa, but most of them boast of a thriving college-band culture.

Until recently, Mapusa’s St Xavier’s college had one of the best college bands in Goa. Now, its biggest stars, who won almost every inter-collegiate band competition last year, have now passed out of the institution. 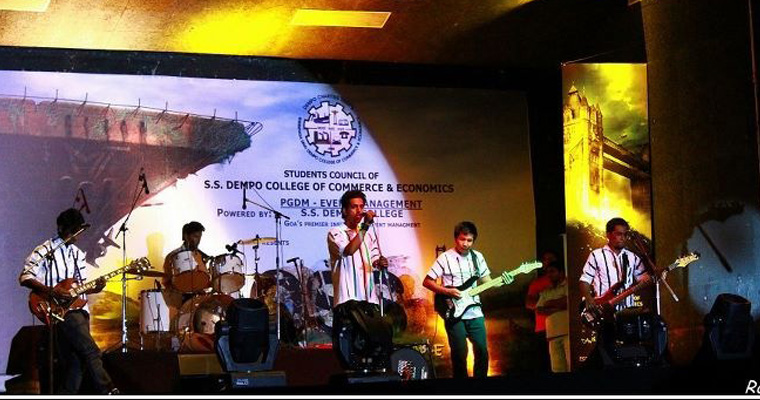 “It’s nice being up there but we just like to get together and make some music,” says Douglas Gracias, a current student at St Xavier’s.

The St Xavier’s band had Irwin on the lead guitar, Kenneth on the keys, Samuel on the drums and Sammy Francis Coelho on the vocals. All current students, they’ve taken a break from the college band to get some studies out of the way.

Kenneth credits his keyboard-playing stint in the college band as one of the reasons why he’s seriously considering belting out the same notes for a living now.

Douglas and Samuel are now a part of a semi-professional band called the ‘Laundry Effect,’ joined by another professional, Irwin, who loves playing the blues.

The whisper going around is that Douglas and Samuel will also soon be back on the college stage after their study break. That just sounds awesome to the college’s music lovers.

Interestingly, while the two pros were away, Douglas and Samuel were replaced by two young women. On the drums was Xavierites Anasthasia, who also teaches at the Taught to Teach music institute, and Maryjane on the Bass.

That’s a noteworthy event for an area long dominated by dudes.

Music-oriented television channels have been in Indian homes for a couple of decades now. And colleges are full of youngsters who grew up on an alluring cocktail of Indian and Western hits. While colleges in India’s urban hubs and even Goa did have the odd band in the past, in recent years the phenomenon has skyrocketed. Colleges specializing in everything from management to engineering to science to the arts or even polytech have begun to spring up bands in the past five years.

“We don’t really go out there to win it you know. We like to play and entertain and we do just that,” says Deepak, a third year BA student of Fr Agnel college. His band ‘The FAP’ (The Father Agnel Pilar) is one of the best in Goa’s college circuit.

The 25-year-old who started off as a Gospel rock band lead vocalist and guitarist has also been a finalist in the Voice of Goa contest, organized in 2010.

The Fr Agnel College Band has Deepak on the lead guitar and vocals, Michael on the keyboard, Tungrashim on the lead, Vallis on the bass guitar and Savio on the drums.

These guys love to entertain and Bollywood is “their thing”.

“We like experimenting with our music. Not all of us are professionals so it becomes a lot more interesting out there,” says Deepak.

And in the zeal to do something different, the St. Xavier’s college band went out of their way and composed an original song, Bruce Dickinson, in memory of the late Bruce Dickinson, the venerated singer of Iron Maiden.

The track has been a rage this academic year and literally had the whole college tapping their feet at a recent event. Seems that everyone loves the good funk in the song.

Goa’s college bands over the years have groomed some of the most popular names in the music scene here.

Carlos Gonsalves, one of Goa’s most accomplished percussionists, was part of the St Xaviers college band in his student days.  He played along with Avito Carvalho on the rhythm guitar, Clyde D’Gama on lead and Trever D’Gama (not related to Clyde) on the keyboard. From this band, only Carlos lives off music today and has played with several artistes across the country.

Carlos said his group wanted to play for a St Xaviers cultural fest known as the ‘Socials’. So the guys got together, practiced for a month and then went to the event organizers, who approved their gig on the very day of the event.

“On that day we sounded so good, that we got a gig that very evening. That’s how we started off,” he told Streets.

In Sanquelim, far away from the urban hubs, another band is just beginning to take off.

Students of the Goa Institute of Management have formed a band. While it hasn’t performed much outside their institution’s gate, the band will be formally launched at ‘Inception,’ an intercollege management event.

The five players in the band are Mondit Mayur on the vocals, Rahul Garg on the rhythm guitar, Gaurav on the lead, Floyd Tavares on the drums and Shubham on the bass guitar. These guys have been practicing for a year now and they plan to produce an album.

Most college bands are not independent entities. They usually belong to some sort of a community promoting music and the arts. And often their very existence feeds a musical culture.

At Fr Agnel College, for example, the interest in bands has given rise to a wider focus on music.

“We started a music association in our college and we now have music classes for all those who are interested. If you walk into our college you will see a lot of kids with really good voices and skills. Especially the girls,” says Deepak, who is presently the president of the association.

Something similar happened at GIM, and now almost 50 students are taking guitar classes, which are taught by the musicians and are part of a stress buster programme providing relief from the high-pressure management studies.

Love of music in Goa, it seems, is contagious.