Goa’s villages are replete with a rich repertoire of folk dances with deep roots in history.

Goa’s villages are replete with a rich repertoire of folk dances with deep roots in history. The most popular are the Dekhni, look Dhalo, Fugdi, Ghodemodni, Goff, Zagor, Kunbi Dance, Mando, Mussol Nach, Perni Jagar, Ranamale, Romta Mel, Lamp Dance, Dashavatara and Veerabhadra. Some dances celebrate agrarian culture, others a warrior tradition, and yet others are spiritual performances. Some dances like the Dhalo, Dekhni and Fugdi are performed only by women, while others like Goff and Ghode Modni are danced only by men. Nearly all the dances originate from the rural areas, but come Shigmo season in March and even the streets of Goa throb with performances of various folk dance troupes in all the major towns of Goa. Let’s have a look at five of the popular folk dances of Goa:

Goff is a folk dance performed by villagers to celebrate the harvest, during the Shigmo festival. Six or twelve coloured cords are hung from a matov (temporary roof) in an open courtyard called mandd, which serves as a ritual space. A woman holding a thali (plate) initiates the dance by a ceremonial welcome. The all-male dancers, each holding a cord in the left hand and a coloured cloth (toni) in the right, braid the cords together by dancing intricate steps. After the multicoloured braid is formed, they dance in reverse steps to unravel it. The songs sung are in praise of Lord Krishna or Nature. The rhythm is provided by the ghumat, shehnai, dhol, taso, zaghantt, etc. It is similar to the Pinnal Kolattam dance of Tamil Nadu and Goph Guntan dance performed during Navratri. 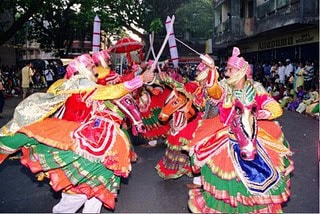 Ghode Modni is literally a dance involving horse-like movements. It is a spectacular warrior dance commemorating the battle victories of the Ranes, the Maratha rulers of the Sattari taluka, over the Portuguese. This dance is popular in Bicholim, Pernem and Sattari talukas. It is performed during the Shigmo festival. The Kshatriya (warrior class) dancers wear costumes similar to that of Rajput chieftains, with a Peshwai pughree as headgear, fix at the waist a mock wooden horse which is beautifully bridled and decorated, and wear anklet bells. Holding the bridle in one hand and brandishing a sword with the other, the dancers move to and fro to the beat of dhol drums, tashe and cymbals, to recreate the prancing of war horses.

Mussoll Nach is a folk play-dance performed by the Kshatriyas among the Christians in Chandor village, Salcete taluka, on the second night of the Christian carnival. Mussoll, in Konkani, is a pestle used by womenfolk for pounding grain. Also called ‘Mussllam Fell (or ‘Khell’)’, it is a war dance commemorating the victory of King Harihara II, son of Bukka I of the Vijaynagar empire, over the Cholas at the ancient fort of Chandrapur around 1310. The characters include a senior Kshatriya gaunkar (villager) as the captor of a bear (symbolic of the Cholas) depicted by a villager dressed in a ragged black blanket and holding a mango or fig branch. The captor wears a dhoti, jacket, turban and anklets, holds a rope tied to the bear and has a ghumot (percussion pot) slung around his neck. 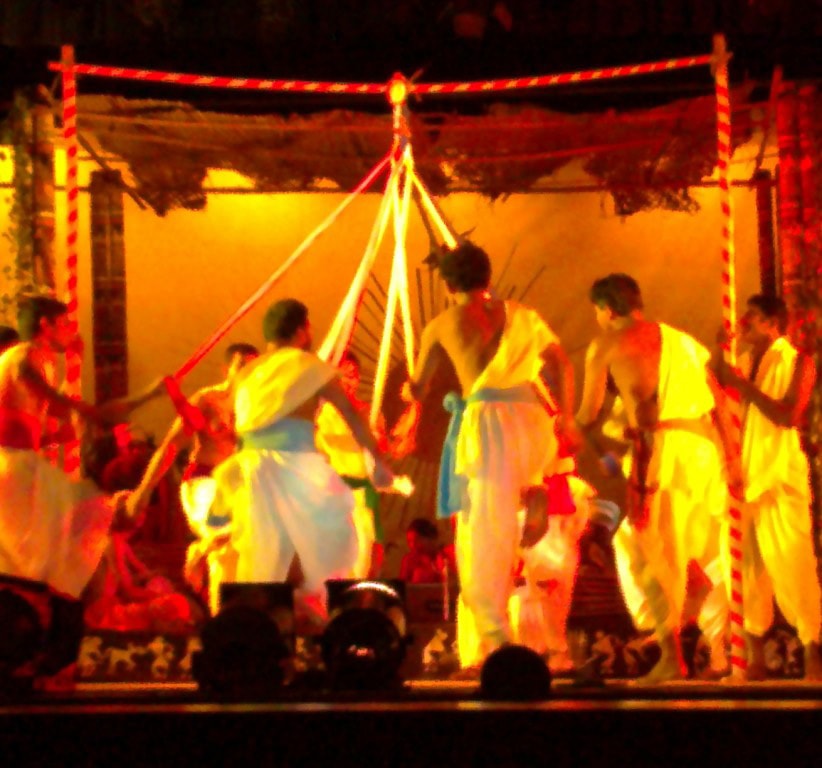 Dekhni means ‘bewitching beauty’ in Konkani. This song and dance is performed by a row of girls or women only, carrying panttis (small earthen oil lamps). The dance gestures are based in traditional Indian classical dance. ‘Hanv Saiba Poltodi Vetam’ (Sir, I am going across the river), one of the most popular songs, is about a devdasi (servant of God) girl who performs dances in temples and social ceremonies like weddings. She approaches a riverbank to take a ferry to the other side where she has to dance at the wedding of ‘Damu’. The boatman refuses and she pleads with him, even offering him her golden earrings, anklets and so on. Only a few original dekhni songs remain. 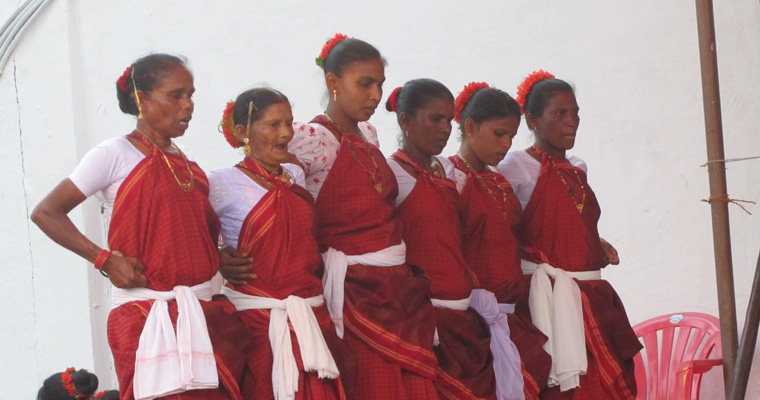 Dhalo is a popular rural folk dance performed by women only in the ritual courtyard Mandd. The women dance in two parallel rows, facing each other. They sway, bend, move forward and backward crossing each other, singing songs on social and spiritual issues. The Dhalo is performed on the moonlit nights of Hindu ‘Pausha’ month in honour of the Earth Mother, lasting a week. It is a relatively slow rhythmic dance, compared to the faster fugdi dance, another women-only dance. The dancers form a link within themselves with an arm-around-the-back arrangement, and sing in harmony.

While events like the Carnival often hog the tourist limelight, it is the folk dances of Goa that reveal deeper insights into this ancient land. While it is quite easy to jump and stomp to Brazilian music generously fuelled by feni, it’s quite another thing to try dancing the Goff or the Ghode Modni. You could literally end up all tangled up or trodden by horses! 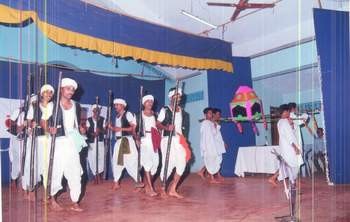