The audience seated at the mini-amphiteatre of the Sunaparanta Goa Centre forthe Arts is taut, eagerly awaiting the performance of an Italian trio of musicians. Saxophonist Marcello Allulli, pianist Giovanni Ceccarelli and drummer Matteo Fraboni are set up in front of a white screen. The trio start off with a prelude of free jazz improvisation, setting the tone for what is to come. After the prelude, a 100-year-old black and white Italian silent film flickers to life on the screen. But it is not silent. The trio accompany the film, a tragic love story, with an amazing jazz rendition of a soundtrack, played live under the starry skies of Goa.

This jazz trio performance was held at Sunaparanta in Altinho, Panjim, in association with the Italian Embassy Cultural Centre Mumbai on December 18, as part of the second edition of the arts festival Sensorium {Love}.The trio’s show is a musical tribute to ‘Cenere,’ a 45-minute-long silent film made in 1916. Marcello composed this music seven years ago, drawing inspiration from jazz, Mediterranean music, folk songs and free improvisation.The three musicians met in Rome in the 1990’s and played together as the ‘Trioakì’, led by German multi-instrumentalist Aki Montoya and featuring jazz maestro Tony Scott.

Cenere, meaning ashes in Italian, is based on the Nobel prizewinning authorGrazia Deledda’s book of the same name. The film starred Eleonora Duse, lauded by Charlie Chaplin as one of the finest theatre actresses. This film is particularly valuable as it is the only existing visual document of Duse’s theatrical art and has been lovingly restored.

The black and white film opens to an Italian countryside. The tiled roofs remind me of Goan village houses. The piano plays contemplatively, with just the faintest rustling from the drummer, asRosalia, an unmarried mother, takes her illegitimate son to his father. The music picks up pace as we see his father, a married man who works at a grainmill. He is shocked at the sight of the boy who proclaims “I am RosaliaDerios’ son!” The people at the mill fall quiet, and the music too is stilled. It’s a powerful use of silence by the jazz trio. “Your wife gives you daily bread, but the other one brings your living flesh!” a mill worker mocks the boy’s father.

Rosaliahas fled without meeting the father, and now feels desolate and bereft. “Once a knit is broken, the threads don’t tie anymore,” she laments.

The boy, Anania, loves a girl named Margherita, but his real passion is finding his mother. When he eventually finds her, the saxophone expresses the mother’s anguish with a savage intensity. There are times when all three musicians come together to create something larger than the sum of their parts. Their sound track rises luminously at these moments to bring tears to the viewers’ eyes. Sadly,Eleonora Duse’s famed theatrical ability does not come through enough in this silent film, a perception that actually caused her to decline any further film roles. 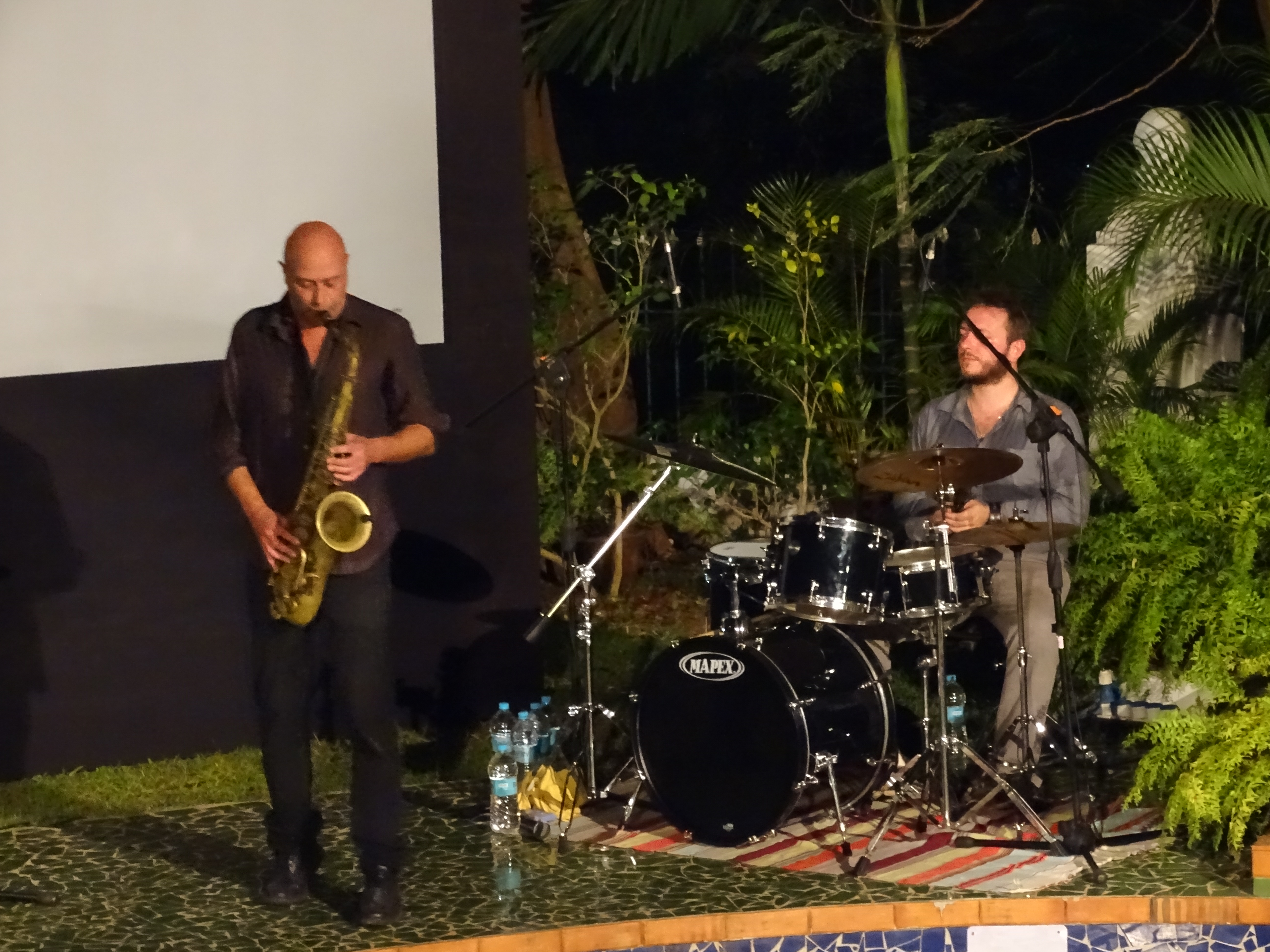 There were moments when the ambience of Altinho played cameo roles in the sound track. Rosalia anxiously awaits the return of her son, whom she has sent back to find whether his beloved will accept the return of his mother. There was silence from the musicians, but a baker passed by the Sunaparanta premises just then, and his horn’s ponk-ponking lent a surreal and comical twist to the moment.

Margherita is furious. She accuses Anania of misleading her. The mother stumbles away brokenhearted, to die in an abandoned house. All the musicians come together in full painful glory here, with orchestral power. I am suddenly reminded of the melodramatic trumpets and drums of tiatr, the local Konkani theatre.  Not surprising, as the first ever Konkani tiatrItalian Bhurgo (Italian Boy), staged in 1892, directed and produced by LucasinhoRibeiro, was inspired by an Italian theatre production in Bombay.

“Tutto e cenere”, all is ashes … life, man, destiny … says the subtitle on the silent film at the end. But that magical evening the ashes came to life,through the music of this talented trio of musicians. Bravo! 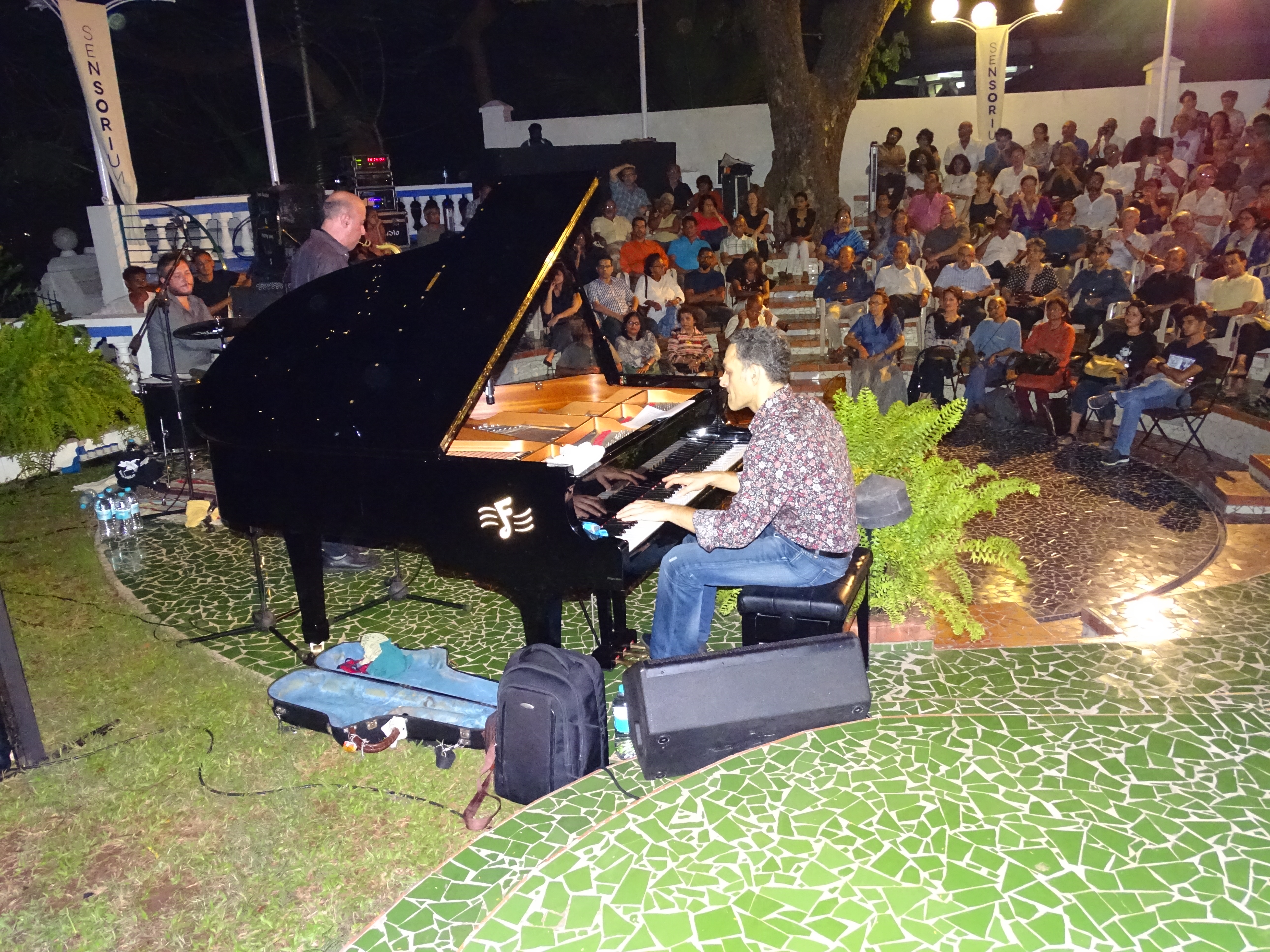