Now these fascinating elements take you back in time through the artworks of 30 international and Indian artists at the ‘Morphology of Archive’ exhibition at the Museum of Goa (MOG) at Pilerne. The show previewed on 12th February.

This multimedia artistic engagement, with an archive of transoceanic associations with Goa, is conceptualised around the migrant histories of Goa. It focuses on the memories of people, and the visual and tactile cultures that have gone into the making of Goa’s diverse identity.

Curated by Sabitha TP, an art curator based in Delhi and London, and Lina Vincent from Goa, the show offers the viewer a vast spectrum of articulations, from the 350 years of medieval Kadamba rule to the 450 years under the Portuguese, thus morphing identities that shaped Goa’s architecture, music, cuisine and customs. Most of the international artists are exhibiting for the first time in India and many of the Indian artists for the first time in Goa.

Among the artists from India, A Naveen Kumar has presented a mixed media sculpture of the ship building culture of that time. The details of shipbuilding, the figures of the Portuguese owners and the slaves on the deck are finely crafted, and merit close study. 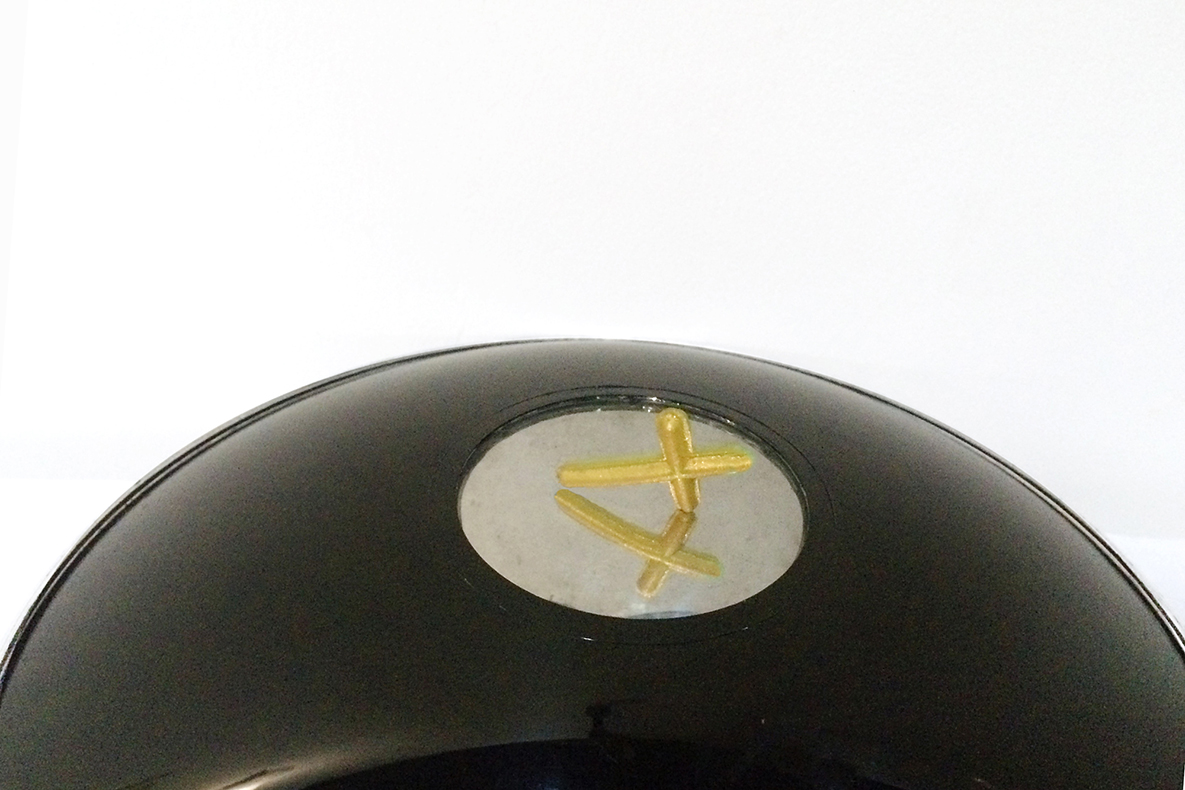 Asmani Shirgaonkar is fascinated with the days before technology invaded life, an era untouched by gadgets, in mythical and nostalgic arrangements.

A video projection by Bhavani G S titled ‘In Ode to Vanishing Spaces’ is about myths and memories written on the sand about ‘Parashurama’, one of Vishnu’s avatars, who is believed to have shot an arrow into the Arabian Sea and reclaimed land from the waters, thus creating the coastline of Goa.

Clare Arni, a photographer of international repute, lives between Bangalore and England. She has travelled to villages in North Goa, documenting traditions passed down generations. She captures the festival Narakasuras (demonic figures) constructed by local artisans.

Mansoor Ali addresses questions of how time shapes identities and temporal sediments. Nandesh Shantiprakash’s discs of the goddess Durga with the floral motif, is a critique of ecological destruction. Narendra Yadav engages the viewer with selective memory which plays a trick on the psyche. When the viewer rotates a wheel in his work, the mirror plays back your image with a halo overheard!

Sanjeev Khandekar has manifested the colonial mutants in rich tapestry. Notice the innovations, strokes and textures in Sudipta Das’s painting. V G Venugopal traces the oceanic Goan history in triptych (a work of art, usually a panel painting, that is divided into three sections). Her portraits of characters like Parashurama and Albuquerque link chronology to multifaceted religious history. 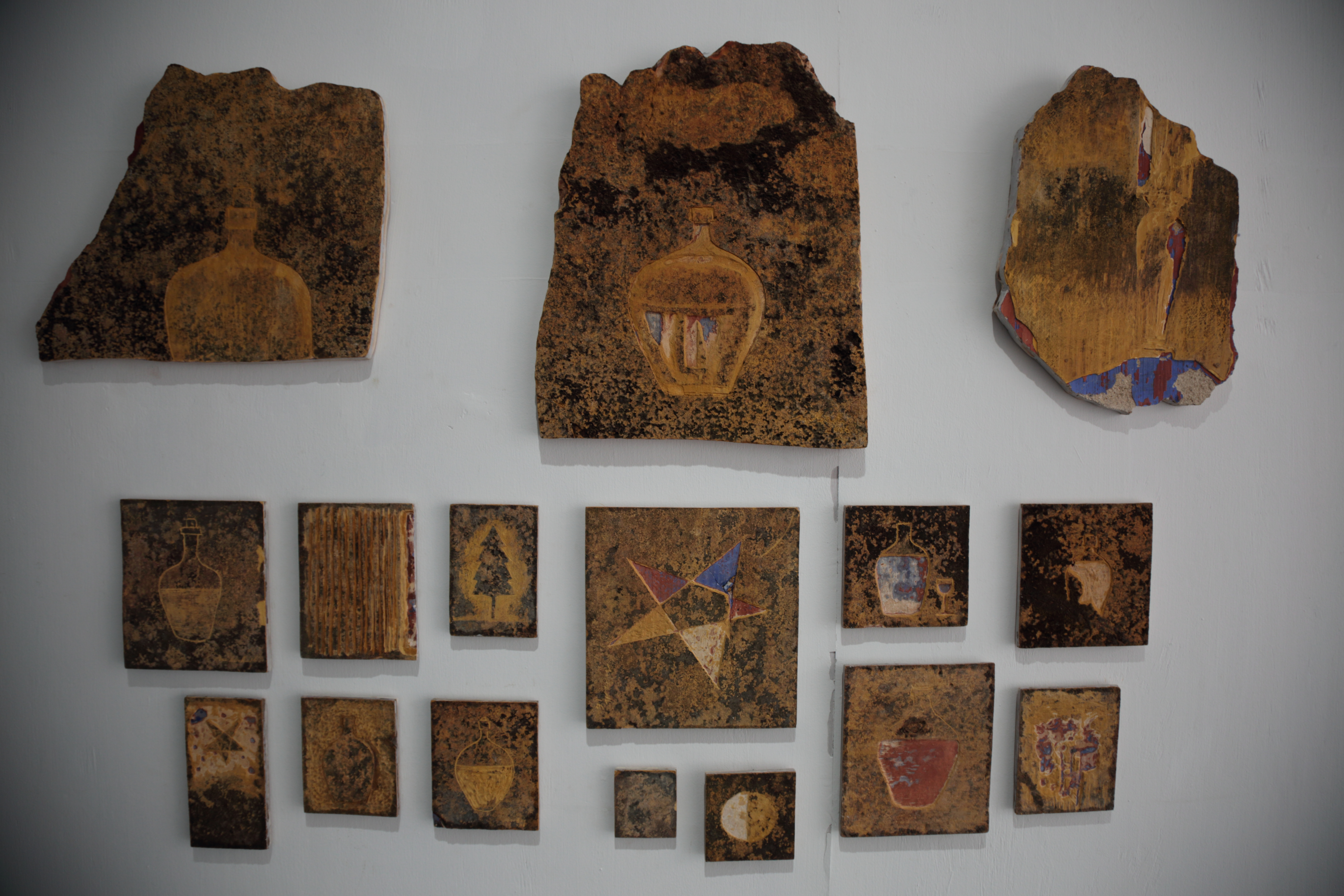 Drawing from the narratives of his grandmother’s stories on Indian mythology, Subrat Kumar Behra’s lithograph on paper narrates a story which considers actions and reactions between the colonizer and colonized. The depiction is inspired by the style of the murals in Ajanta.

Rashmi Mala Devi retraces Gracia de Orta’s 16th century text about gardens with herbs and medicinal plants, and the disappearance of bio-diversity of the present. Garcia de Orta was a Portuguese physician of Spanish Jewish descent who lived and practised in Goa. His work on the medicinal material and natural history introduced Indian medical practice to Europe. There is even a garden named after him in Panjim.

Among the Goan artists, Subodh Kerkar reveals the history of carving through pieces of a wall in a house owned by the Gomes family constructed in the 19th century. The pieces mounted on a panel illustrate the detailing and skill of the craftsmen. 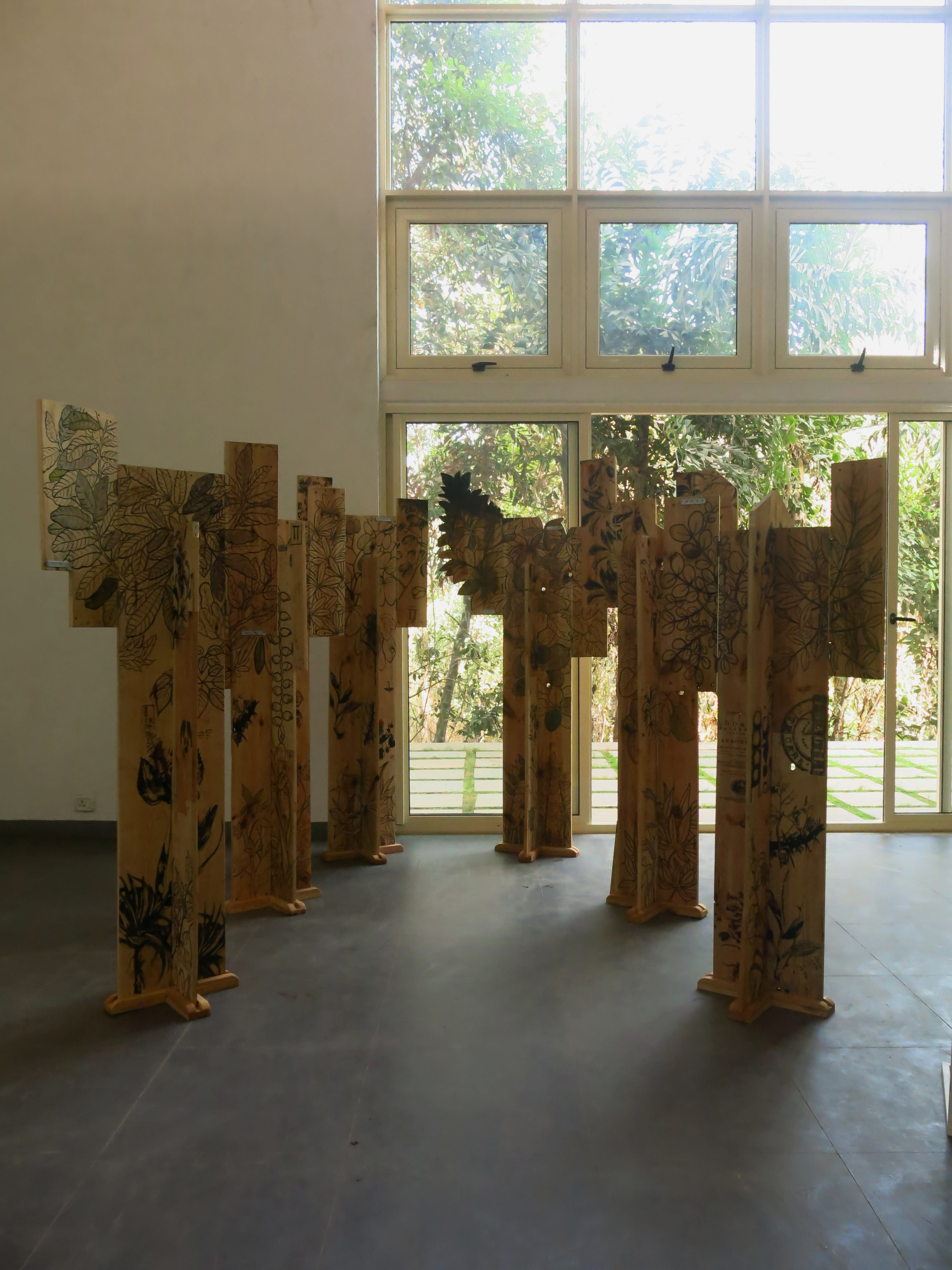 Having a portrait of the family on the walls hs always been de rigueur in Hindu and Christian houses in Goa. Art historian and author Savia Viegas travelled around Goa exploring old black and white photographs, and has documented them in prints.

Sachin Naik’s evocative narration of the slave market in woodcut on paper has textures with dramatic lines. Check out the figures of the slaves in various postures on the rugged surface. Muneer Kabir’s placement art of a cross positioned in a convex-concave structure, and the depiction of the slave trade to Goa in Kedar Dhondu’s mix media, are both works retained from the inaugural exhibition at MOG.

‘Morphology of Archive’ is on exhibit at Museum of Goa (MOG), Pilerne, Bardez – Goa till 2nd May 2016