A Demon in Goa And Happy Diwali to All!

A Demon in Goa And Happy Diwali to All!

The festive season of Diwali is here and everybody is in a happy mood. Diwali in Goa is even more joyous, price as it also marks the start of the tourist season. People in the streets are dressed in traditional Indian wear, seek sweets and gifts get exchanged,seek firecrackers light up the sky, and sparkly lights flutter at every house , shop or building you look at. In India, it doesn’t get any bigger and brighter.

Aside from loud firecrackers and soothing diyas, one of this Indian festival’s most noteworthy traditions in Goa is the celebration of Narkasura’s death. It may seem a bit morbid to the uninitiated, but the beheading and burning of the demon king Narkasura throughout the state is actually the celebration of light winning over the darkness, a harmonious and joyous communal event.

So here’s the thing with Narkasura. Its legend goes back to ancient times when the land of Gomantak (Goa) was ruled by the evil Narkasura. According to tales which have been passed down over hundreds of years, the demon king had all the kingdoms of earth under his control and was hell bent on his evil ways. He was terrorizing everybody and there was little that anyone could have done, given his powers.

At one point it was claimed that he had kidnapped over 16,000 women, including the wives of Gods like Krishna. He was extremely feared by the people and even Gods. One of them, Indra was so upset by his bullying and destructive ways, that she left the planet. Here entered the greatest savior ever known in Hindu mythology, Krishna. An avatar of Vishnu, he was not going to lie down and take these atrocities committed by the crazy demon king.

What ensued was the mightiest of the battles, with Narkasura attacking Krishna with every fancy weapon he could get his hands on. But all that was of little use as Krishna finally destroyed the evil Narkasura with his Sudarshan-Chakra, a trademark weapon of his (which also appears several times in the epic Mahabharata). The final beheading of the demon King through the Sudarshan-Chakra marked the beginning of a new era and the end of a dark age. Thus Diwali the festival of lights is the start of a new age full of light and hope, with darkness defeated. 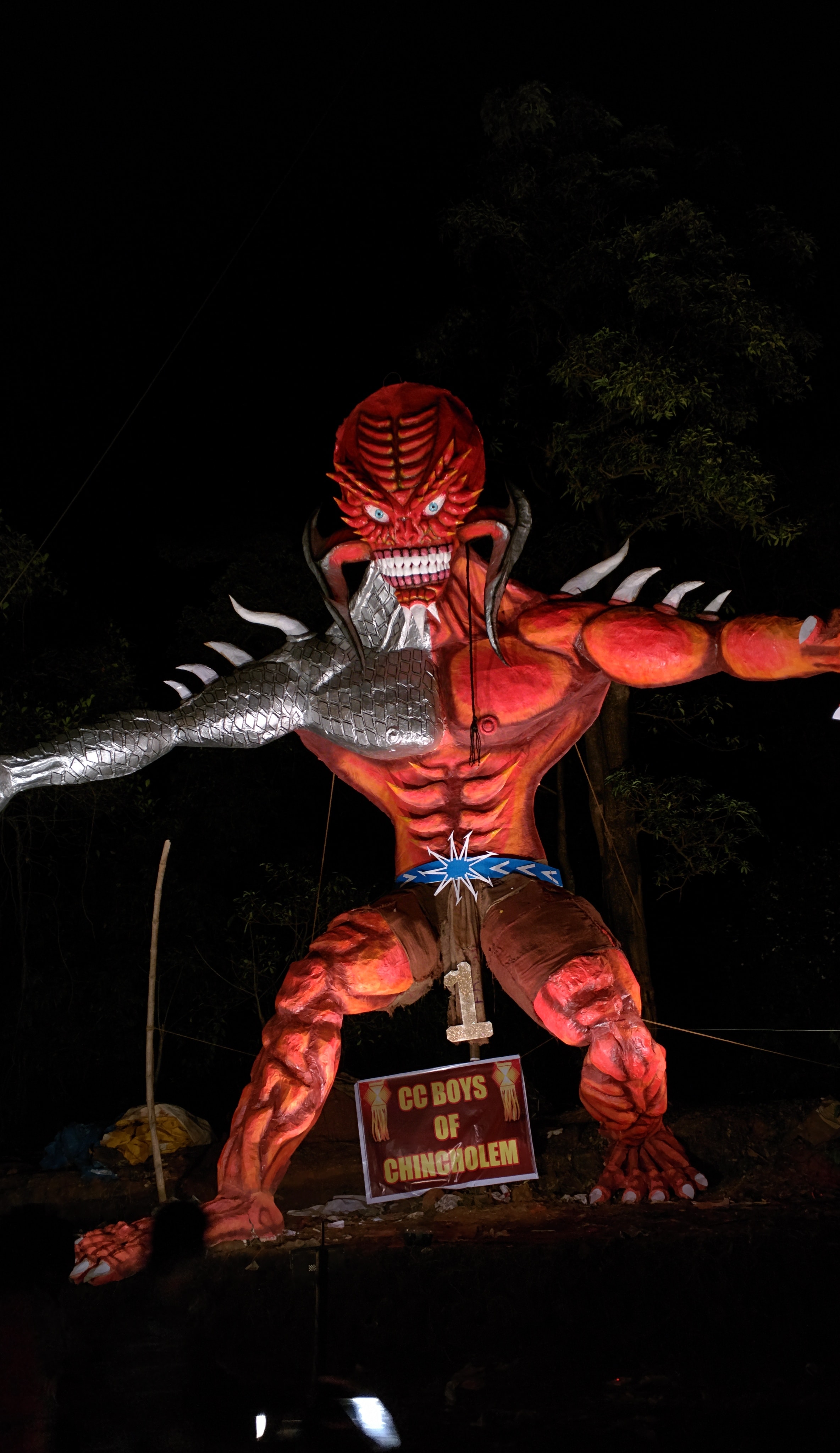 In the first part of the demonstration the demon is beheaded, emulating the great victory of lord Krishna. And then the demon is burnt. This important mythological event is celebrated widely Goa with great enthusiasm.

Shubhangi Narvekar a local from Margao now living in Panjim fondly recalls, “We used to go around the city (Margao) in a truck to look at the Narkasura. That time there was just one big Narkasura in the whole city which everybody would come to watch. It was very nice and exciting. Various smaller Narkasuras would be made in a lot of houses including ours but the city would have just one big one.”

Narkasura celebrations have been embraced by younger generations with as much enthusiasm as their elders, if not more. At a time when many traditions are disappearing, this one is alive and kicking. Narkasura celebration in Goa has seen an increase in popularity to the point where city and village competitions are now commonplace. Various communities make their own Narkasuras, which they parade around their city or village before finally showing their demonstration, out of which the best selected gets a handsome cash prize. Various Narkasura merchandise has also started appearing in markets, such as a ready-made head which can be used to make one’s own Narkasura.

Fortunately, the commerce of the celebration is not in any way reducing the spirit of the festival, marked by love, community and joy.  Krishnadas Naik, a 70-year-old retired government employee, explains, “This tradition was our tradition and we love it that our children our taking it forward.” 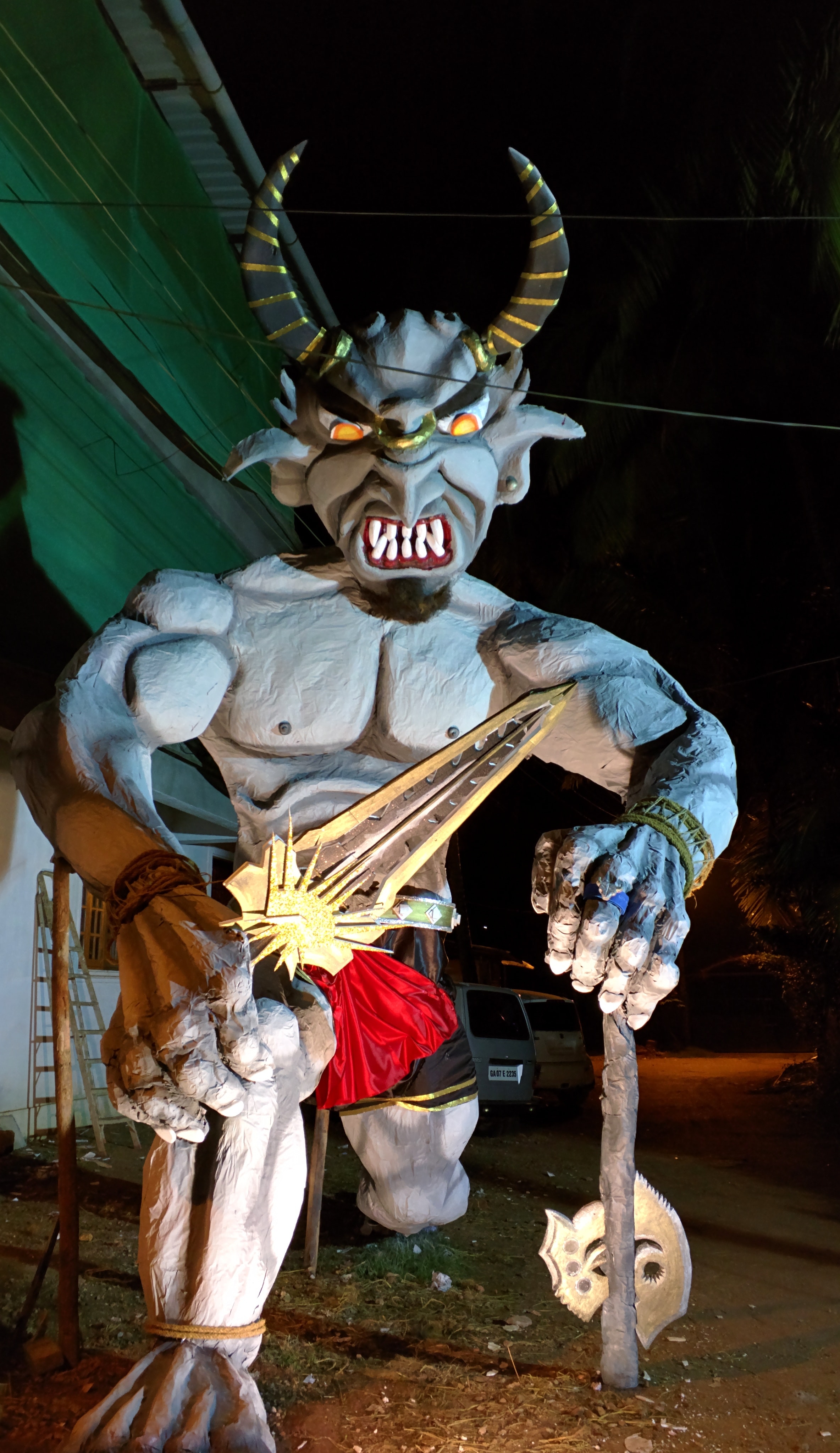 I was lucky enough to be part of the Narkasura competition in Panjim a few years ago. People from all walks of life were present for the competition, whistling and cheering for the competitors, who start preparing for that day long before. All the Narkasuras are paraded through the city on trucks with large processions following them. Shubhangi further recalls, “I use to hear the loud noises of the drums while I waited for the Narkasura on my terrace. Everybody in my house would be sleeping and telling me to sleep as well, but from the noise of the drums I knew they were coming. I sometimes use to wait until 12 or 1 to watch the Narkasura procession.”

The noises of the drums might have now been changed to the noise of metal music or EDM, and the simple processions might have been changed to competitions, but the spirit of the tradition carries on. The festive vibes and happy communal nature of Goa is helping to keep this tradition alive.  It’s good to know that in this day and age, when times are changing fast and folks would rather be on their smart-phones than talk to each other, we at least have some communal events like these that we can all look forward to and share. 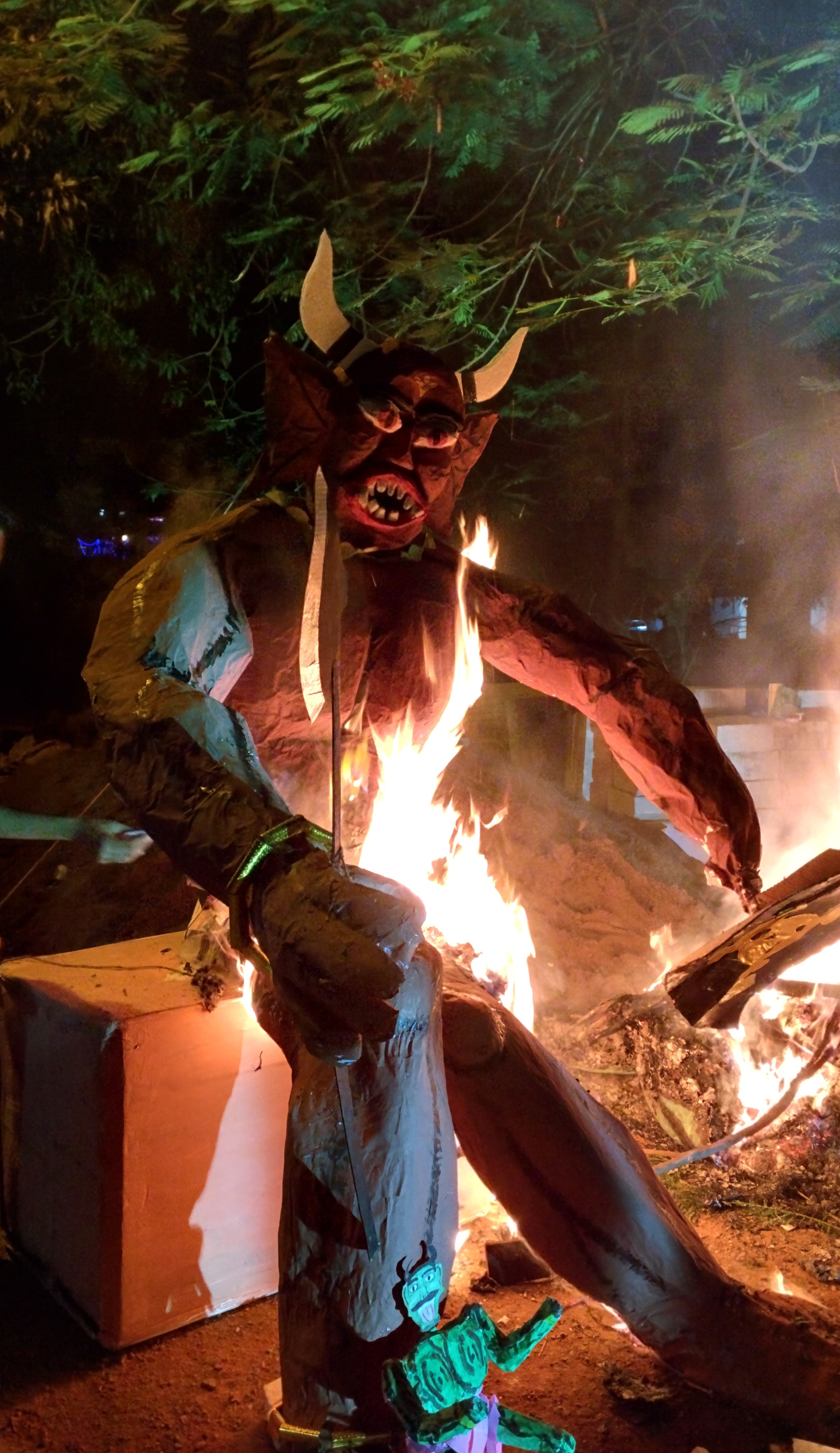