At 19, She Does Us Proud Natasha Palha received a tennis racket from an aunt on her 10th birthday – an event that triggered her dream run to tennis stardom. At 19, she’s set her sights on becoming India’s numero uno women’s tennis player and to break into the World Tennis Association’s (WTA’s) top 100… END_OF_DOCUMENT_TOKEN_TO_BE_REPLACED

Natasha Palha received a tennis racket from an aunt on her 10th birthday – an event that triggered her dream run to tennis stardom. At 19, she’s set her sights on becoming India’s numero uno women’s tennis player and to break into the World Tennis Association’s (WTA’s) top 100 player league. “She’s working every muscle in her feet and hands to achieve these twin goals in the next three years,” says her dad, Brian Palha, currently accompanying Natasha for training and competition at Pune. That gift from her aunt, coupled with the love of tennis that runs in the Palha family, is what prompted Natasha and her sister Vanessa to take up regular playing in the spacious backyard of their home in the central Goan village of Agaçaim. It was at a tournament she won while on holiday in Mumbai that her family and tennis scouts saw in her little, 12-year-old frame the potential of a world beater! She won another tournament in Dubai in 2006. A year later she won the Asian Under-14 title and the Asia No. 1 ranking in Bahrain. Getting there involved a gruelling six-tournament circuit for the 13-year-old at venues across several cities, including Pune, Damascus, Amman and Chandigarh. From then on there was no looking back. Her exploits at Bahrain helped her gain her first major sponsorship with the Dempo group of companies, which named her ‘brand ambassador’. Today Natasha is ranked 800 in the International Tennis Federation world rankings for women, and her goal is to reach the top 100 within the next two years. Many believe she can do it. About a week ago, Natasha won the doubles title at the National Grass-court Tennis Championship held at the South Club, Kolkata. In the singles, she fell one short of becoming the national champion, losing out to the defending champion Ankita Saina 1-6, 2-6 in the final. The year 2013 couldn’t have started on a better note for the “intelligent, friendly and outgoing Natasha” as her dad Brian and mom Ophelia, both dental surgeons, describe theirs and Goa’s ‘Tennis Princess 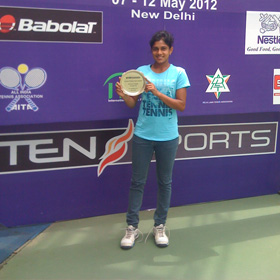 Before she could travel to Kolkata for the National Championship, Natasha had already pocketed two titles in India’s top-of-the-bracket tourneys in February. At Mumbai’s Juhu Vile Gymkhana Club on February 4, she won the women’s title for the Rs 12-lakh Omkar All India Ranking Tennis Championship, defeating Sharmada Balu of Karnataka in gruelling three sets 2-6, 6-4, 6-3. A week later, she went on to claim both the singles and doubles titles at the Central Excise Open AITA Grass Court Tennis Championship in Kolkata. Top seeded in the singles at this tournament, Natasha displayed tough nerves to live up to her billing and face off stiff resistance from qualifier Bhuvana Kalva of Andhra Pradesh, defeating her 6-3, 6-7 (2), 6-2 in a 2-hour and 20-minute battle. With no Tennis Academy or trainer worth his or her name or any other support system available here in Goa, how did Natasha rise so high? Family and, of course, her sponsors, the Dempo group of companies, which together have taken care of her travelling, training and coaching expenses both in India and abroad. Finance is only one part of the story. The other is Natasha’s long spells of being away from family and friends. “But she is at ease with the many co‑players and personalities she meets in the course of her tennis engagements. She’s a crowd favourite at many tournaments,” says her dad, Brian. But Natasha herself feels “very indebted” to Mr. Srinivas Dempo and the House of Dempo for the encouragement and support she got. “Because of their (Dempo’s) initiatives, Goa’s youth has been able to sustain their talent in the international arena and can today claim to be world beaters in sports ranging from chess, squash, swimming and of course tennis!” Natasha wrote to Streets in an email from Pune. Of course the Dempo sponsorship is more the exception than the rule in Goa, where many prodigies complain of a lack of support to pursue their athletic dreams. That said, Natasha’s case proves that with a little talent, support and luck, Goa can find its rightful place on the national and international sports map.