Toothpaste tube Superhero fights Pet bottle Villain The film crew huddle around the set. A vampire-like bad guy is about to punch Mr Genius, advice  a scientist, as the voice over yells ‘Help help!’ A superhero swoops in from the sky and takes on the bad guy. The film director is a teenage boy, viagra 100mg  clutching his script… END_OF_DOCUMENT_TOKEN_TO_BE_REPLACED

The film crew huddle around the set. A vampire-like bad guy is about to punch Mr Genius, advice  a scientist, as the voice over yells ‘Help help!’ A superhero swoops in from the sky and takes on the bad guy.

The film director is a teenage boy, viagra 100mg  clutching his script with pencilled drawings scrawled on it. The superhero is made of two toothpaste tubes. The diabolical villain’s head is made of paper. The set is a small cardboard box, inside which characters made of bottles, cans and other waste items wage a war of good versus evil. Welcome to the filming of ‘Macroman to the Rescue’.

Last week, 15 children got together in Aldona to produce three animated short films, like this one, using only waste material. This innovative project called ‘Aldona’s Magic Box’ has been carried out by Communicare, a trust
established in 2005 with the aim of teaching languages, such as Portuguese, Spanish and Konkani, all under one roof. An earlier animation workshop had been conducted using drawings. Nalini Elvino de Sousa’s film company Lotus Productions provided the resources to shoot and produce the movies.

In all, 15 children participated in the film-out-of waste project. Eight of these kids came from underprivileged backgrounds, but were sponsored by friends and wellwishers from Panjim and surrounding areas.

A demo film ‘Orion the Worm’ was made by Isa, one of the facilitators. Desmond Pinto, Lavina Fernandes, Ria Cardoz, Pratima Khandolkar, Logan
Lobo were some of the kids who took part.

A second film, by a mixed group of boys and girls, has less pow wow. In ‘A Different Christmas’ Santa Claus goes around gifting washing machines (tetrapaks with a straw pipe sticking out) and other stuff,
but eventually gives Goa a great gift – snow. Cardboard and tin characters happily watch snow falling in the garden. 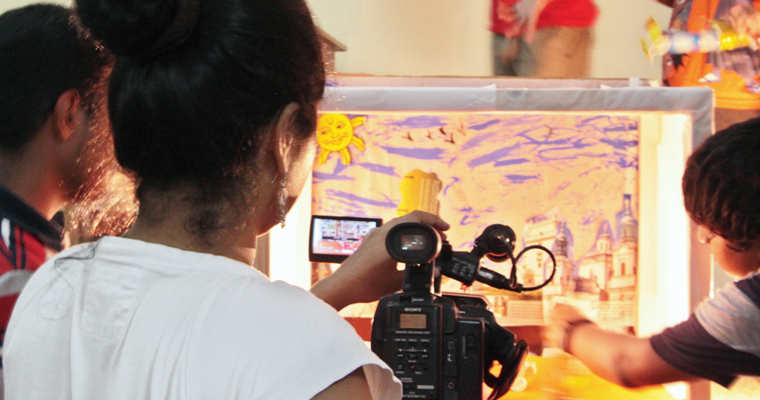 ‘About Cats and Dogs’ opens to an idyllic nature scene. Nima the cat is chased around a lake (coloured paper sheet) by Jeetu and Bob, two ferocious Toothpaste tube Superhero fights Pet bottle Villain dogs made out of Nescafe tins. Mercifully for Nima, the voiceovers of the dogs’ owners are heard, calling them home.

“On the first day we taught them to segregate the waste that they would use for the films,” says Nalini. “ Then over the next few days they created characters, drew up scripts and prepared the background using colours on paper.”

A beer carton was opened up to form the backdrop onto which the coloured background was pasted?voila? A Magic
Box!

“We used a Sony camera on a tripod and 2 lightbulbs. The film was shot in stop-motion, we shoot for 3 seconds, then change the character’s position, then shoot again for 3 seconds, and so on. The editing was done using Final Cut Pro software. But this kind of films can even be done using a cellphone camera and simple movie-making software available on Windows,etc.”

On the film ‘set’ of Microman to the Rescue, the boys innovatively cut out a hole in the top of the Magic Box, so that Macroman could drops through and battle the villain. 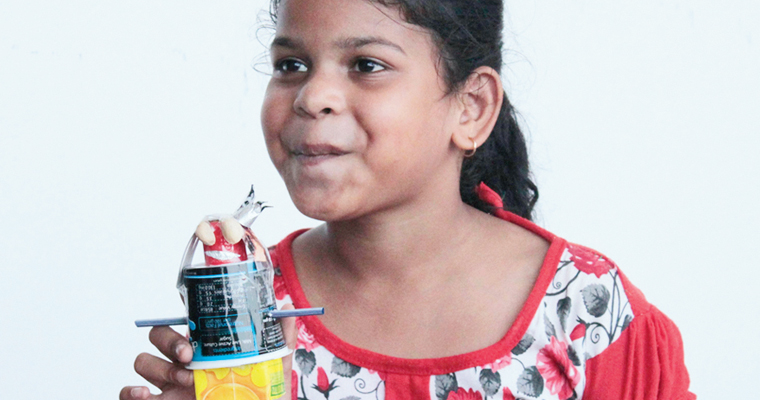 Shaira Sequeira-Shetty and John Lino manned the camera. Avinash Mesquita, Mark Fernandes and other volunteers
of an Aldona-based group collaborated on the project. This group is working to educate the villagers of Aldona on waste segregation and recycling.

Nalini’s Lotus Productions has also recently produced Dances of Goa, a documentary on the ethnic dance forms around the state and the long running Contacto Goa series for the Portuguese TV channel RTP.