What Good Is The Exposition of Relics If It’s Done Through the Exploitation of Children?

Teenage girl working at an excavation site near SFX Church

What Good Is The Exposition of Relics If It’s Done Through the Exploitation of Children?

Think, for a moment, about the meaning of the exposition of the relics of St. Francis Xavier, set to take place in Goa in just a few days from now. Think about what the man stood for, and how the congregation he co-founded, the Society of Jesus, also known as the Jesuits, is the tradition from where our current Pope Francis hails. Astoundingly, our state – in its zeal to quickly prepare the exposition of St. Francis Xavier’s relics – is trampling on the humanitarian ideals he espoused.

On one recent afternoon, I witnessed children as young as eight years old carrying heavy boulders above their heads to prepare the parking lot for the exposition. Toddlers roam the roadside as their parents toil. The children are covered in dirt, unattended and most definitely out of school. That’s right, this momentous event that takes place every decade or so in Goa – the exposition of the relics of the most famous person ever to have called Goa his home – is being executed with the aid of child labour, a grievous affront to the most basic, internationally-accepted principles of human rights.

Listen up, people of Goa. Pay heed Public Works Department. THIS IS A JOINT CHURCH-GOVERNMENT PROJECT! THIS IS THE EXPOSITION OF THE RELICS OF A SAINT! These children have a right to be in school and to be cared for. Honour the great saint through living by his humanitarian values. What good is the exposition of his relics if it is carried out through the exploitation of children?

“It’s the government duty to ensure that at least minimum facilities are provided to these kids, which they are entitled to by law,” says eminent human rights activist and advocate Albertina Almeida.

At age three, one might expect Laxmi to play with soft toys with her mum and dad and possibly learn a few nursery rhymes. But this is not the life Laxmi leads. A dusty footpath surrounded by debris and mud is her bed. She is fast asleep with a soiled blue bed sheet and a towel to cover her body. 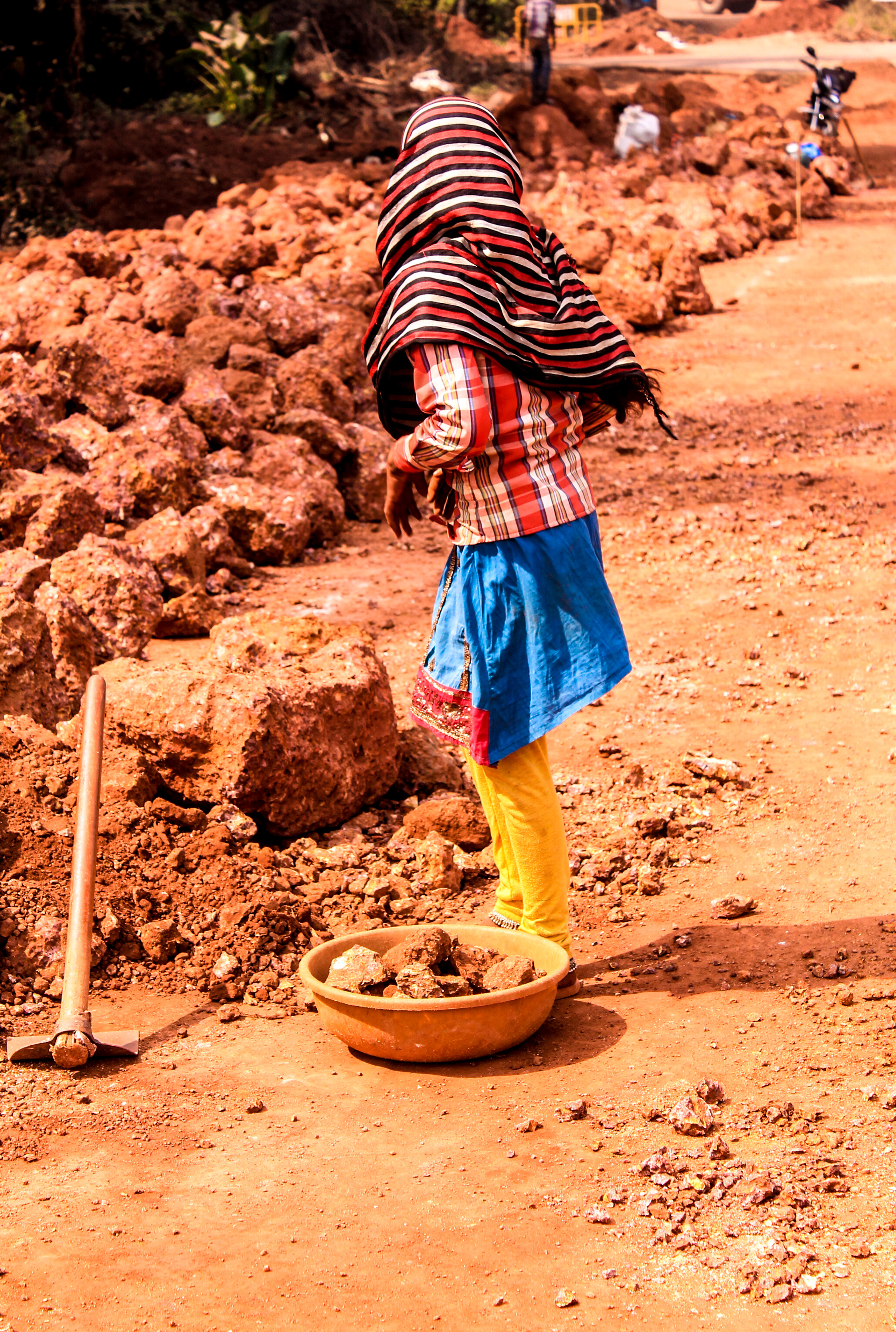 Laxmi’s mother is sweating in the hot sun as she and other women – in addition to several obviously underage kids – are busy crushing boulders and fixing the road for the exposition.

It’s not clear exactly how many kids are affected, but the numbers appear to be in the dozens and it’s an indisputable fact that child labour is involved. I saw it myself, with my own eyes.

If you haven’t paid much heed to this and other situations like it, you’re not alone. Since almost every construction site in Goa is brimming with migrant workers and their out-of-school children, including the road widening project on the highway leading to Old Goa, many residents simply dismiss the phenomenon as the way the world is, or perhaps just ignore it. I’m sorry, dear reader. This is NOT the way the world is supposed to be, not when the lives and well-being of children are at stake.

Nanashaheb, a 37-year-old native of Karnataka agrees the government should provide educational facilities to the kids but he admits he is helpless.

“What will a poor man like me ask the government or contractor?” he asks.

Another Karnataka labourer, 30-year-old Sachin Chawan, is helping to build the parking lot for the event. Speaking about his two-and-a-half-year-old son’s future education, he says, “I’ll send him to school once I return home.” But he had no words when asked how he planned to manage that, given his nomadic existence staying in a single place for no longer than six months. 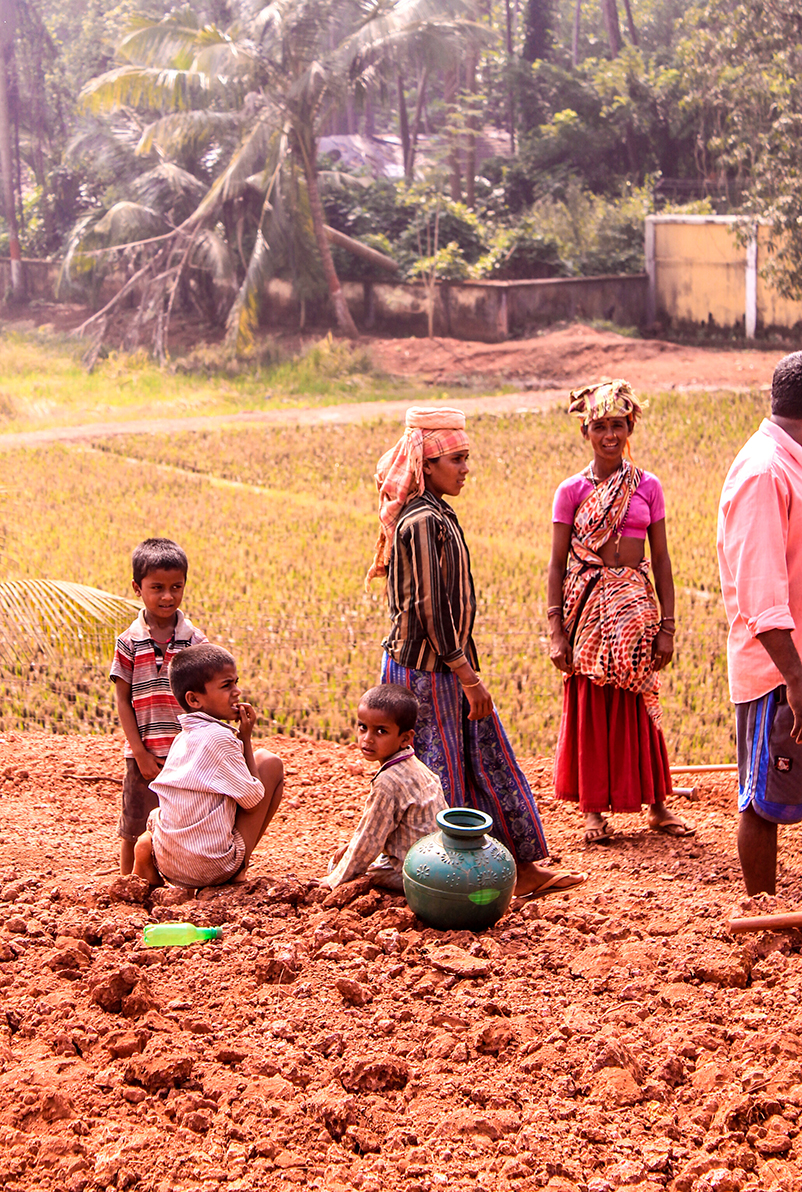 “We cannot provide education facility as they work for a few days here and move out once work is over”, explains contractor C H Abdulla, overseeing some of the works at the site. He said there are four separate groups of workers engaged in the project, each consisting of 15 to 20 men and women, plus their children.

I put several calls in to the Public Works Department, or PWD, to get their comment, but the calls were not returned. Finally, I found a PWD official at the site, but he refused to talk to me when he found out I was a journalist.

Goa’s Directorate of Women and Child Welfare operates 1,262 ‘anganwadi’ or pre-primary schools, which provide educational, nutrition and health facilities to the poor. The department’s director, Vikas Gaunekar, said sending the migrants’ children to these schools or availing of the directorate’s other benefits is the sole decision of the parents. After explaining the plight of the kids at the ongoing construction works at Old Goa, Vikas agreed to send his team to survey the area and work to enroll the kids at a nearby anganwadi. 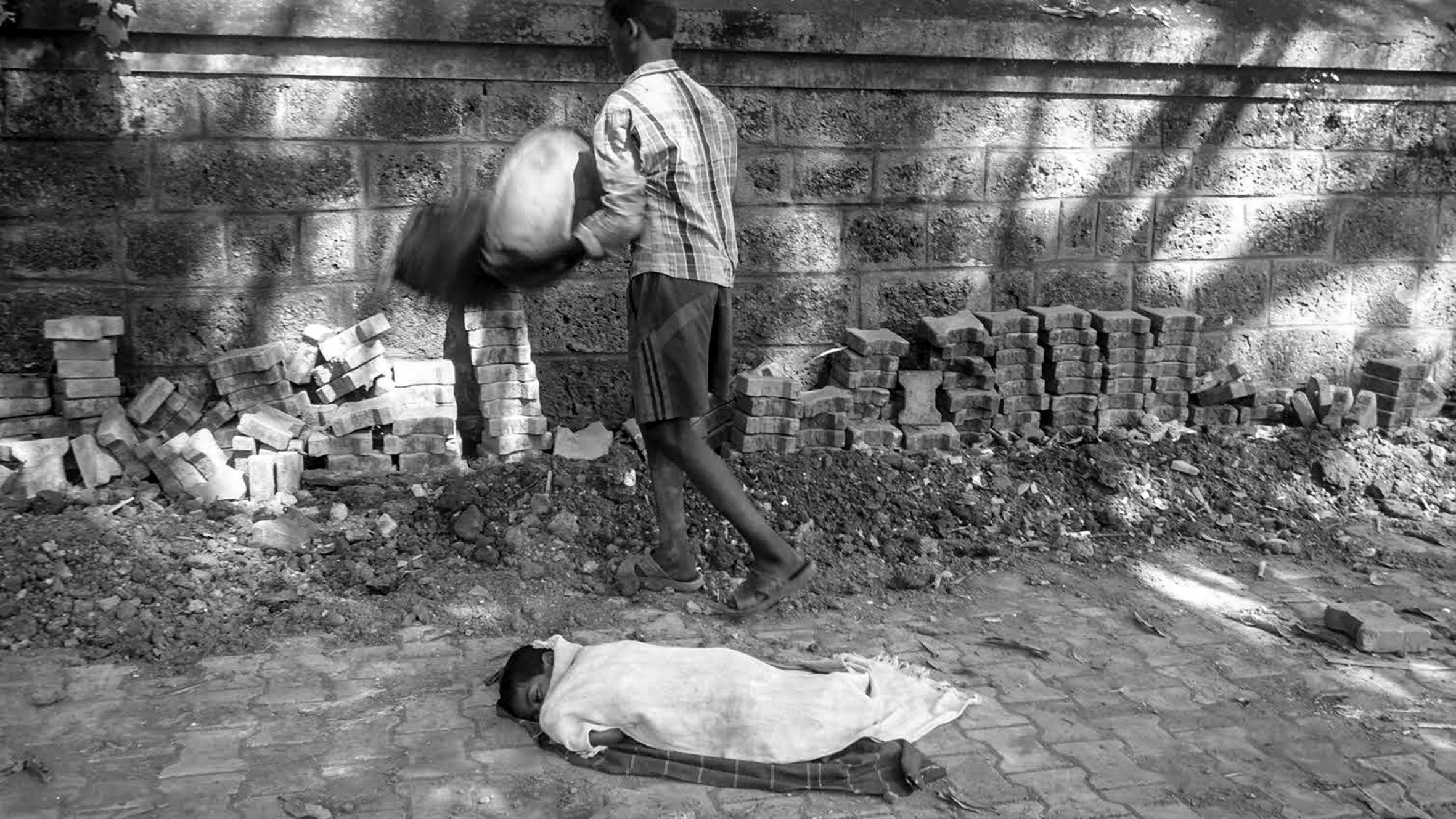 Baby sleeping near an excavation site

Peter Viegas, Coordinator of the Save Old Goa Action Committee, puts the onus on the government. “If the development work itself is done haphazardly what more do you expect?” he asked, adding that the church-government entity charged with preparing the exposition was given an Rs 50 crore budget but “the work only started 3 to 4 weeks back.”

The spirit of St. Francis Xavier and the Jesuits is at the core of the exciting, positive changes taking place at the Vatican these days. Showing off his relics is a poor way to honour his life and memory, if we fail to take responsibility for the well-being of these young souls.