It couldn’t have come at a better time. The I-League triumph of Churchill Brothers extended Goa’s supremacy in the country’s highest level football competition. It is the second time that the Churchill Alemao family-run club has won the prestigious title in the last five years and thus ensured that the trophy does not leave the… END_OF_DOCUMENT_TOKEN_TO_BE_REPLACED

It couldn’t have come at a better time.

The I-League triumph of Churchill Brothers extended Goa’s supremacy in the country’s highest level football competition. It is the second time that the Churchill Alemao family-run club has won the prestigious title in the last five years and thus ensured that the trophy does not leave the shores of soccer-crazy Goa.

In the last five years of the I-League competition, medical both Churchill and Dempo have won it twice apiece and Salgaocar claimed the title once in 2010-11.

In the match against Mohun Bagan at the Tilak stadium in Vasco, which ultimately sealed the title for them, Churchill Brothers suffered an early reverse when they conceded a goal in the first half itself. But the legion of fans and the Churchill team management heaved a sigh of relief before they burst into celebration at the final whistle when Sunil Chetri, the India captain, got them the equaliser in the second half.

Churchill needed a draw to stay clear of second-placed Pune FC to clinch the title, and Chetri’s equaliser ensured that.

If Chetri’s antics in the match made sure Churchill didn’t let the title slip out of their hands at the last hurdle, much as it has happened to them a few times in the past, the consistent hard work of their Brazilian midfielder Beto (Roberto Mendes) 33-year old Brazilian was as much responsible for the triumph along with the consistent performances of a number of other team mates through the I-League season. 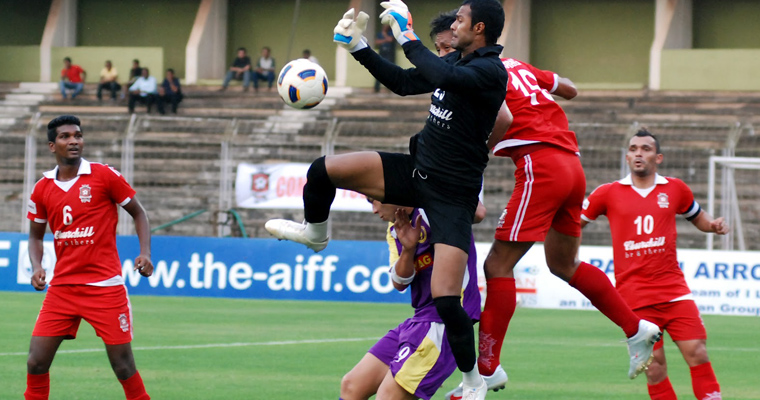 Although an injury kept the 33-year-old Brazilian off the action for nearly a month, he returned for the crucial match and played his part, as he did through the season.

Teamwork and determination, according to Beto, was the secret behind the Champions’ campaign in the I-League. He said, the team worked very hard for 10 months and always looked forward to the day on the football field when they could claim the title.

“That day was at the Tilak Maidan when we drew with Mohun Bagan. We just celebrated,” Beto, who along with Jose Ramirez Barreto runs the Brazil Futebol Academy in Goa and Kolkata, said.

He however declined to reveal anything about his plans for next year, although he said it was his dream to win the Asian Football Confederation (AFC) Cup with an Indian side.

You may not be a Churchill Brothers fan. But if you are a soccer-loving Goan and follow football closely, the Varca side’s I-League triumph will have for sure lifted your spirits.

“As a Goan, it feels great that Churchill won. As long as it’s one of the Goan sides that wins and emphasizes Goa’s supremacy over Kolkata in football, it feels great,” said Erol Jorge, a die-hard Salgaocar fan.

Churchill Brothers celebrated with their players and fans at a South Goa party venue on Wednesday evening but the club’s CEO Valanka Alemao said she’s not one who will rest contented. Instead, she’s already planning the future, and the next goal she has set for the club is similar to the one her team’s Brazilian midfielder has set for himself – becoming AFC cup champion.

“It is a big achievement but we must move forward and not rest on our laurels,” said Valanka, daughter of the maverick Goan politician and owner of the Club, Churchill Alemao.

“The immediate next target for the club is to become Asian champions,” she said, adding that they have great plans for the club with the ultimate dream of seeing India play at the World Cup.

The I-League triumph of Churchill Brothers is indeed another stamp of Goa’s domination in Indian football.

There are three other Goan sides who vied for the title alongside Churchill Brothers – Defending Champions Dempo Sports Club, former champions Salgaocars and the promising Clube Sporting de Goa.

Although the performance of these three Goan sides wasn’t as spectacular as Churchill’s was in this year’s national league, all the three managed to stay far clear of the relegation zone and will be there in contention along with the champions next year…to perhaps further extend Goa’s supremacy in Indian football.