You kill yourself for the 7 minutes. but then you’re done.

Steven and his Dog

You kill yourself for the 7 minutes. But then you’re done

For all those who haven’t yet heard about the scientific 7-minute workout, sickness what you’re about to read could potentially change your life. Scientists have concluded that you can get the same fitness benefits from a short, high-intensity workout as you can from prolonged endurance training. The results appeared three months ago in the American College of Sports Medicine’s Health & Fitness Journal (http://bit.ly/15skaIK). Already, millions of people around the world have changed their workout routine to reflect the new findings. I am happy to count myself among those millions.

In 12 exercises using only body weight, a chair, a floor mat and a wall, you essentially push yourself to your limits for seven minutes – albeit in 30-second spurts separated by 10-second rest periods. For me at least, the seven minutes of real discomfort are irrelevant, given how quickly they’re over. Scientists conducting an exhaustive study found that the physiological changes the workout produced in the body were akin to what you get after a long run and some weight training. It’s over an hour of traditional exercise condensed into seven minutes. 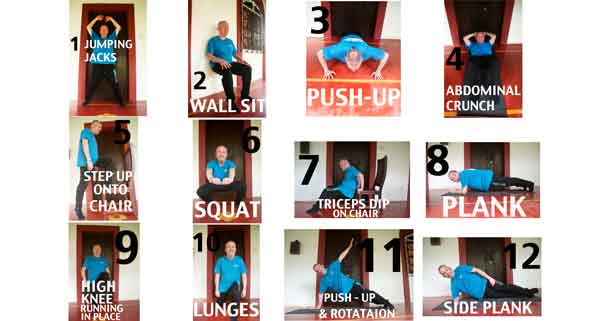 When I first read about this in a New York Times blog (http://nyti.ms/1gZl6UZ), I was quite excited because it seemed to me that if you can’t receive the benefits of exercise with no exercise at all (my real preference), this would be the next best thing. Who doesn’t have seven minutes? There’d be no excuse not to do it every day. And all you need is a wall, a chair and a floor mat (or plush carpet)!

The first obstacle, of course, was figuring out how to do each exercise. If you’re like me, you won’t necessarily know what the ‘plank’, the ‘wall sit’, the ‘tricep dip’ and the ‘lunge’ are. I solved that easily with 10 minutes on YouTube. Type in ‘plank’ and lots of videos will pop up showing you how to do it.

My next challenge was figuring out where to do it. I couldn’t tell whether my large German Shepherd has an aversion to or a great love of jumping jacks. But whatever it is, she jumps, too, when I do them, and ON me. So I decided to lock her in a bedroom when I do my scientific workout. Problem solved.

There’s something else you need to know about this workout. Since it really is based on science, you can’t decide to unilaterally alter the order or the timings of the exercises. The workout alternates focusing on the large muscles of the upper body with those of the lower body. And, as the New York Times reported, the rest periods allow the unexercised muscles to metaphorically “catch their breath.”

At first I tried estimating on my own when 30 seconds and 10 seconds were up, but that didn’t work very well. Try looking at your watch while performing a jumping jack! Then I tried cajoling my wife and kids into ‘timing’ my high-intensity moves and restful intervals, and quickly learned all three of them felt they had better things to do with their time (such as laugh at me performing squats).

Then I Googled the workout again and learned that among the masses performing the exercises were more than a few geeks who took it upon themselves to post online timers. For those of you reading this article on the Net, here’s a really weird one: http://bit.ly/18oZazr (warning: parental discretion advised). But the one I like best is this one: http://www.7-min.com/. That’s because it tells you when to switch sides in exercises like ‘step onto chair’ and ‘side plank.’ If you live with others, just make sure they all remain completely silent during the seven minutes so that you can hear the little bells and clicks that tell you when to start and stop (yes, I know, this will do wonders for your household popularity).

I’ve been doing the 7-minute workout for a month now and I highly recommend it. Am I any thinner? Not really. Stronger? Maybe, but that’s not proven either. Which leads me to my next point. What if scientists come up with a new study next week disproving the purported merits of the last study – scientifically concluding that the scientific 7-minute workout is not scientific at all?

I’m hedging my bets against that one. Sometimes I repeat the 7-minute workout twice (which the ‘experts’ say is fine). And sometimes I run on the beach as well, just in case seven minutes turn out not to be enough. 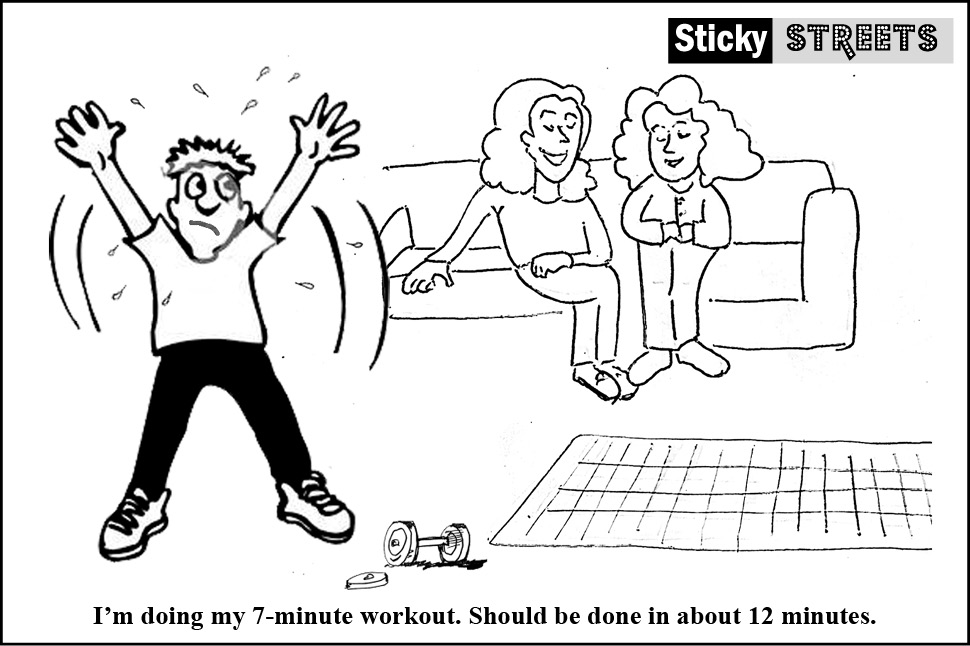