EDITOR’S NOTE: The Goa Streets series, “Trailblazers of Goa: Passionate People Who Make A Difference” features awesome photos and interviews with those who break convention, obliterate barriers, create new realities and inspire us to greater heights. We have asked each of our Trailblazers the exact same questions, including who they’d invite to a party if they could invite any 5 people, living or dead, what they’d change about Goa if they could be King or Queen, and what their secrets are. This week’s Trailblazer is Mark Seagraves, a former professional footballer who is training a new generation of football players right here in serene Goa. Trailblazers of Goa pictures have been taken by noted photographer Eugen Hanley, with words by long-time writer and world traveller Hilary Lapedis.

Blazing a trail like that of the Beatles, former English Premier League footballer, Mark Seagraves found his way from Liverpool to India. Just as the superstar pop group inspired legions of fans, so Mark is igniting young peoples’ passion to follow in his footsteps and maybe, just maybe, become football superstars of the future. His piercing eyes dance with passion when he talks of his love for the game- “nothing equates to playing football” – and this raw desire is mirrored in the energy displayed by the youth training at Don Bosco College, Panjim and in Sangolda. Mark is motivational, passionate and above all, driven to inspire success.

This news flash may come as a surprise to the unaware – a real-life former professional footballer, who played for Liverpool, Norwich City, Manchester City, Bolton Wanderers and Swindon Town, has set up shop right here in our very own Goa, moulding a new generation of would-be soccer stars. Mark is keenly aware that India , with its 1.25 billion people, is woefully behind in assuming its rightful place in global football. He’s in the vanguard of football leaders working to change all that.

Mark knows he’s a fortunate guy. Remembering “going out there on a Saturday…and performing”, he fizzes with emotion. From age 16 to 32, he played professional football at the highest level.  Make no mistake. This means a lot, as the percentage of humanity that reaches the English Premier League is infinitesimally small. Mark’s professional playing career ended 18 years ago through injury and he then went onto hold several high profile coaching positions. He became assistant coach at Blackpool and the first team coach at Wigan. Now, Goa is his home, and all of us who live here are winners because of it.

Mark found his way to India to work as Technical Director for Arsenal Soccer Schools with a mission to improve Indian grassroots football. The reality of the situation struck him early on. He witnessed a lack of attention to quality and a disparity between his own high level of professionalism and in the company’s approach and this prompted him to establish his own company, ‘The Football Faktory’.

Mark sees the talents in all his players and accepts anyone who wants to play. And whilst he is focused on raising any of his players to reach the world stage, he also wants them to achieve their full potential overall. With a nutritionist on staff, he recalls how one obese boy shed his kilos and gained self-esteem under the Football Faktory’s tutelage. He starts with START: Self-esteem, Timekeeping, Attitude, Respect and Teamwork. In Mark’s world, being a good football player means being a good human being.

Mark hasn’t left behind the glory of the television camera.  He’s a studio commentator with Andrew Leci for Ten Sports, so even if we’re too old to join his training schools, we can still listen to his punditry on EPL and the Champion’s League.

What’s next for Mark and the Football Faktory? He has big plans for growth and integrating sports into the academic curriculum. He dreams of setting up schools that would be centres of excellence for sporting pursuits. He has partnered with Anglo School International Services (ASIS), a group of schools in the UK, to offer scholarships and exchange programmes for his trainees and one day soon, one of Mark’s proteges may be found on the world stage and on a television near you.

For a defender, Mark, you’re a striking star!

Mark, you make a difference! 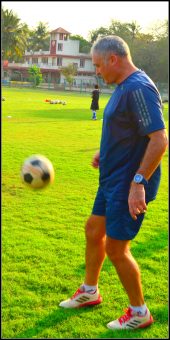 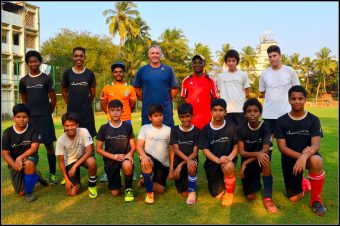 What inspires you about Goa ?

Mark Seagraves: Apart from the idyllic beaches, beautiful scenery and culture, I am inspired by their love for football.  Goa has a rich heritage when it comes to football and I want to try and take that to the next level and produce players capable of playing at the highest levels of world football.

If you could become King  of Goa, what would you change about it?

If I was King of Goa I would try to change the mindset of people/parents with regards to sports and education.  We need to have a balance between both. Unfortunately at the moment it is heavily favoured in the educational areas. I would also like to change the politics and corruption that exists in every sector of Goan society. I would encourage a world where honesty and transparency were the norm in all aspects of Goan life.

Guy Garvey – Lead singer of my favourite band Elbow.An amazing vocalist and lyricist.  His lyrics are so down to earth and so real.  I would ask him to explain how he came to write such lyrics and what was the inspiration behind them.  He would provide the music for the evening.

Tony Benn, MP Labour Party. Someone I admire immensely,sadly he is no longer with us. He was a truly great politician and an honourable man.  His values and his ethics are something that I hold dear. A true gentleman with an amazing knowledge of domestic and world politics.  Would be interesting to hear his views on what is going on in the world today.

Stephen Fry – Actor / Comedian/ TV Presenter. Probably one of the most intelligent men on the planet.  He knows everything about everything that needs knowing about.  He is very opinionated and very funny.  A mix I love. He would be our go-to man for all questions and answers.

Pele – Footballer, Legend.The greatest footballer to have ever played the game.  He revolutionised the game and took it to new heights. He inspired so many people to become footballers and was a true role model. He would sit directly next to me so I could ask all the questions I have about football and his football life.

Jack Nicholson – Actor. Jack is my all-time favourite actor.  His career has spanned many decades and he has produced so many iconic roles.  His versatility is amazing.  Everything he has done has been acclaimed. I love the fact that he has been the playboy, the rebel and the comedian.

Who doesn’t want to be Jack Nicholson????

The will to succeed and the desire and passion to try to be the best I can. The drive and energy I have now for the grassroots of Goa and Indian football is immense. I want to bring a level of professionalism  and quality coaching that has previously not been seen here. I want to develop youngsters and let them live their dream if they are good enough to do so. Maybe one day we will develop a player or players capable of playing at the highest levels of world football.

Personally, I want Goa to be the haven for all people across India and the world to come to, to enjoy its undoubted beauty and natural charms.  I would want for all the beaches and surrounding areas to be clean and green.

I am petrified of snakes and sharks in equal measure.  Have seen both up close and do not want to see them again.

I am also fastidiously tidy and organised.  Some would say OCD but I just say organised ha ha 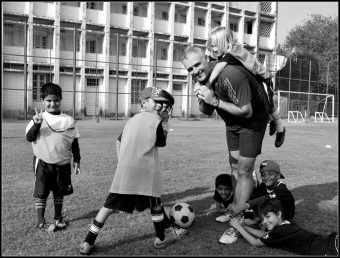 For more information about the Football Faktory, click here.