Goa became famous as a hippie destination in the 1960s. Most hippies around the world went on to different things, for sale like raising families or joining politics or playing the stock market. But in Goa, the hippie phenomenon is frozen in time – with many hippies still here living much the same lifestyle as… END_OF_DOCUMENT_TOKEN_TO_BE_REPLACED

Goa became famous as a hippie destination in the 1960s. Most hippies around the world went on to different things, for sale like raising families or joining politics or playing the stock market. But in Goa, the hippie phenomenon is frozen in time – with many hippies still here living much the same lifestyle as they did 40 years ago. Below, Streets’ Gauri Gharpure tells their story.

“I am not a Hippie! I am a Happy!” laughs John Paris, a UK-native who at 77 can pass off as 60. In 1965, he walked from Baga to Arambol, where he found like-minded peace-loving friends. He decided to stay put.

“We stayed near the lake, which gave us sweet water to drink. A boy came to sell fruits and vegetables once a day. And, there was a spring nearby. There were just 50 of us here then,” John reminisces, as he sits with oldies armed with guitars, flutes, mouth-pianos, rattles and tambourines. 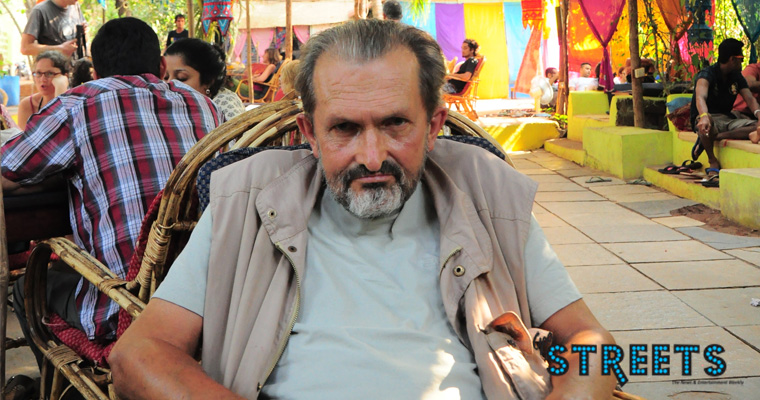 Unperturbed by loud tourists and drunk men carousing on the beach, the group sits calmly and sings songs praising Rama, Krishna, Shiva and other Hindu deities. When asked if they believe Goa is the only remaining hippie haven on the planet, they chorus an emphatic “Yes!”

While John is uncomfortable with the hippie tag and the stereotypes associated with it, his real-flower pendant and the music he makes on a mouth-piano, might as well qualify him as a hippie poster boy. “I don’t buy flowers, I don’t pick flowers. But the Jacaranda tree, it shares its flowers with people. It gives selflessly. So, I love the Jacaranda and I collect her flowers fallen on the ground,” he says.

John believes there is something to Goa, especially Arambol, that attracts extremely creative hippies, including gifted musicians, from the world over. Take Biddoo Baba, for example, who identifies himself as someone who “makes music.” He wears a worn-down brown jacket, he sports locks in his hair, and dazzling rings adorn his fingers. A big jhola (a decorative Indian handbag) hangs from his shoulders.

It’s an unusual pleasure to listen to Biddoo’s music. He has recited the hymns in an endearing foreign accent to the backdrop of an eclectic mix of techno trance, guitar and drums. This hippie is deep into yoga and Vedas (Hindu scriptures) and knows quite well the meaning and context of the hymns he recites, unlike, unfortunately, many temple-going Hindus like me.

Martin sells jewellery – an assortment of silver-encased trinkets, pendants and earrings made from sea shells and semi-precious stones – at Ingo’s Saturday Night Market, the quintessential hippie hangout of Goa. His eyes look a pretty green in the glare of the light bulbs, and twinkle like stars.  Martin left Germany to settle in Goa in 1978.

One of Goa’s most well-known hippies is a man known as Loka Devadas. Now 64, he’s been coming to Goa since 1967. Born Bjorn Skalen, he worked as a teacher in his native Sweden for many years. His wanderlust began at the age of 19, when he hitchhiked to Kathmandu to meet Hindu sadhus and Buddhist monks. Devadas says his spiritual quest culminated in the 70s when he met Osho Rajneesh, the famous Indian guru whose criticism of organized religion and support of more open attitudes towards sexuality made him a controversial figure. Today, Devadas runs a website, http://friakademi.se/, to share talks, music, sound art, digital sculptures and videos through which he aims to inspire meditation, humour and awareness.

The Woodstock festival celebrated in New York in 1969 became an important symbol of hippie culture, of the free-thinking people who epitomised love, peace and music. These ‘flower power’ people adorned themselves with blossoms, swam in the lake, danced with the wind, cooked and shared food in open fields,  often got high on marijuana, and made lots of music. It was around this time that writers like Allen Ginsberg, Ken Casey, Neal Cassady and Jack Kerouac gave birth to the “Beatnik” genre of un-repressed written expression, while Bob Dylan and Bob Marley immortalised the philosophy of love and peace with their songs. Perhaps for the first time since Gandhi, peace again made headlines because of the Woodstock hippies.

Many hippies from all over the world were attracted to India around this time. Some drifted to newly found spiritual centres in Pondicherry or Pune; others immersed themselves in a spiritual movement called Iskcon (International Society for Krishna Consciousness) and some also refused to associate with any spiritual tag. Many returned to their countries and went on to raise families, settled in routine jobs, or even began making big money on the Wall Street. 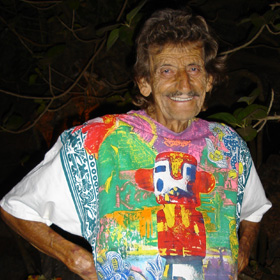 In Goa, the first small group of these happy-go-lucky people found their haven in Anjuna, in the sixties, a sleepy village with few residents. People with names like Eight-finger Eddie, Junky Robert, Hollywood Peter and Trumpet Steve immortalised Goa’s hippie identity. Slowly, the word spread and more and more foreigners came flocking. The Anjuna flea market began swarming with barter and business. The local economy blossomed.

Wolfram, who first came to Goa in 1967, remembers those days: “All the doors used to be open. No one locked their homes. When I returned to Goa in 1974, there were all these big, big locks! And it was so cheap, 80 paisa for a pig thali, one rupee if you eat at a big hotel.”

Wolfram is fondly called “Muji,” short for Bangladesh’s first president Mujibur Rahman, by his friends in Anjuna and Arambol. The 69-year-old Austrian comes to Goa for six months every year when the Austrian winters become too cold for comfort. The German Bakery in Anjuna is his favourite joint, as it is with many hippies who adopt Goa as their second home for several months every year. Pankaj Kohli, owner of the bakery, laughs when asked to point out some regulars: “How can I point out a hippie for you? It’s not about dressing or smoking. It’s all in the mind!”

Indeed, the “hippie” tag immediately creates an image of a rebel, a bohemian outcast who refuses to look and behave as expected by society. In Goa, many live life on their own terms by following creative pursuits, all the while spreading the mantra of world peace and love.

True, times have changed. But John Paris, who stays in Goa half of each year, is happy with the new generation he’s seeing today.

“People always ask me if I am disappointed with the crowds of young people flocking to Arambol. I tell them this: ‘When I came to Goa in 1965, there were just 50 of us doing yoga, singing and dancing by the lake. Now, there are 50,000 of us, most of them young blood.’ That is nothing but good!’ It proves that we are still a people that believe in love, in caring.”

Just as he refuses to buy flowers, John refuses to use the cell phone and shuns electronic devices. Most of his friends also live a frugal, yet full-throttle fun lifestyle. They may be frozen in time, but the hippies in Goa continue to make noise for peace.