The ovation was thunderous. The man with the red ‘zitar’ had just finished an electrifying set that sent chills down the spines of many who witnessed the phenomenon at the Arpora Saturday Night Market. That was back in 2008. The man was Niladri Kumar, health an Indian classical and fusion musician who created the extraordinary… END_OF_DOCUMENT_TOKEN_TO_BE_REPLACED

The ovation was thunderous. The man with the red ‘zitar’ had just finished an electrifying set that sent chills down the spines of many who witnessed the phenomenon at the Arpora Saturday Night Market.

That was back in 2008. The man was Niladri Kumar, health an Indian classical and fusion musician who created the extraordinary zitar, malady a kind of electric sitar.

“I had already ruined one of my dad’s old sitars doing the experiment,” says Niladri Kumar, recalling how his creation came about.

“It (the zitar) could finally be brought off the shelf in 2004. But, it can never really replace the Indian classical sitar,” says Niladari, adding the ‘zitar’ is to the sitar what an electric guitar is to the acoustic guitar. 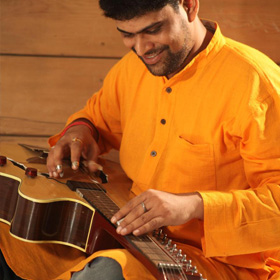 Goa has become something of an international playing ground for musicians whohave stretched the limits of their creativity to come up with new and unique instruments. A lot of it has to do with taking traditional Indian instruments and mixing them with the best of the West.

Way before Niladari made waves here, Goa played host to Harald Weisse, a German national popularly called Nafi, who came up with an instrument which is also a sitar-guitar cross.

“I come from the time Ingo and Mackey’s were one Saturday Market. One day, a friend gifted me this sitar-guitar crossed instrument. Its rounded box is made from the rare Kalibassa pumpkins found in the Seychelles islands,” Nafi said, recalling with some chagrin how someone misplaced it at a show in Arambol in 2006.

Nafi, who used to play in a band alongside fusion musician Prem Joshua, built his own version of this sitar-guitar cross.

“I have made 45 till date. The 46th is mine. Each one made by me has its own character, is unique and has its own name. My one that I have is called ‘The Guardian’,” the 62-year-old Nafi said.

Unlike the sitar, which has resonance strings and nine playing strings, Nafi’s ‘The Guardian’ is a six-stringed instrument on which you can play chords, the bass, as well as employ power chord finger patterns in both Indian and Western styles.

“The sound you hear from this instrument is a cross between a sitar and a guitar. Mine’s called a ‘bumskin’,” says Goan guitarist Elvis Rumion. 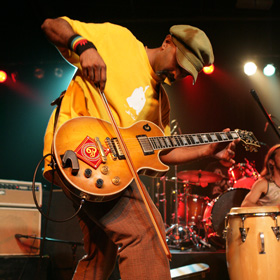 Elvis has performed at his own Internet show twice and played on Nafi’s innovation at his ‘Sattva Show’ as well.

Away from the Saturday Market in the north, south Goa is also home to another German national who has made an electronic version of the sarod.

And Goan Clive Vaz, a big proponent of unusual instruments, plays the flute, djembe and the Jews harp, an ancient instrument also known as the mouth harp.

Clive gives this description of the ‘traveler’s digeridoo,’ another experiment made by fusing old and new:

“Yes, far from the Eucalyptus wood made instrument, this one is made of pvc pipes,” says Clive, ‘The Ayuddha Project’ solo artist and ex-member of Mumbai’s multi-instrument band Tribal Flora.

“It changes pitches too, unlike the original, rather aboriginal instrument,” Clive says.

“This instrument can actually be replicated by any hollow cylindrical structure. So just like acoustics range from more reverb in a bigger room and less reverb in a smaller one, the longer the pipe, the more the bass and vice-versa,” he says.

Neptune Chapotin is organising the first Mouth Harp Festival of India at Arambol on February 7 and 8 at a beach location called The Lost Monk.

“The mouth harp, for instance, has more than 1,500 versions,” Neptune says.

Elvis, who’s responsible for artiste management at the Arpora Saturday Night Market, agrees that Goa get its share of people with new musical ideas.

“Sometime back this guy called Alex from France would hang around many beach parties. He’s the guy who made violins for maestros like L Subramanium and the like. Then there was Pepe who has made his own instrument that he says is a cross between a guitar and a santoor,” Elvis said.

Madan Solanki, the man behind the sound consoles at Cafe Loodas at the Anjuna Flea Market and the Saturday Night Markets for years, recalls many bands which come with exotic instruments.

“Apart from many Gypsy and specialist bands like ‘The Bagpiper Band’, last year, I remember this Russian group of four crazy guys, who only played on toy instruments,” says Solanki.

The band sounded authentic, even if they looked silly playing exquisite jazz runs on the small ‘happy birthday’ keyboards meant for two-year-olds.

Speaking about innovation with musical instruments, Nafi reminisces about the time he was part of the 1980s band alongside a percussionist named William and the now great Remo Fernandes. He recalls that William had an obsession for drumming on kitchen vessels.

With almost all Indian classical music starting in C sharp, musicians like Paco, a sitar player, Nafi and a few others have now adopted D sharp, which is a semi-tone higher, to accommodate Western instruments.

That way the corresponding chord work becomes easier, without having to get into the various sharps and flats needed to accommodate C sharp.

The musicians say these changes allow for new sounds, and a better range of scales and octaves. When people talk about Goa as a musical paradise, it’s as much about this kind of creativity as about trance, electronic dance music or ‘silent noise’ parties endemic to Goa.

When the history of these new instruments is written, the fact that the word “Goa” will be prominently mentioned is a source of pride.